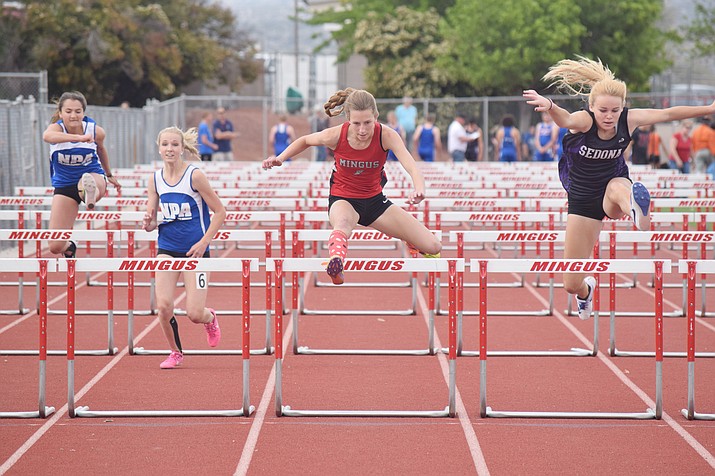 In her first meet of the season, Mingus Union senior Hannah DeVore achieved the automatic state qualifying standard in both the 100- and 300-meter hurdle events. (VVN file photo)

One week into the 2018 track season, Mingus Union’s Hannah DeVore and Meg Babcock have punched their ticket to the “Big Show.”

On the boys’ side, Mingus junior Kendrew Streck is loudly knocking on that same door.

At last week’s season-opening D3-D4 Small Schools Invitational at Mesa Community College, DeVore and Babcock turned in performances that met the automatic qualifying standards to compete in the May 5 Division 3 State Track and Field Championships.

DeVore, a senior, met the qualifying standards with second- and third-place finishes in both the 100- and 300-meter hurdle events. DeVore clocked in at 16.63 seconds in the 100 hurdles, which is just 3-hundredths of a second off the best Division 3 time in the state so far this season.

Likewise, DeVore met the auto qualifying standards in the longer race, with a 48.07-second performance over 300 meters.

Babcock, a junior middle-distance specialist, utilized front-running tactics to easily win the 800-meter run Saturday with an auto-qualifying 2:24.40 performance. En route, Babcock knocked a whopping 4 seconds off the invitational record in the event. She will be looking to meet the auto-qualifying mark at 1600 meters Friday in Glendale.

Later, Babcock teamed with DeVore, junior Shelby Brenner and freshman Natalee Rogers to easily win the 4X400-meter relay in 4:17.96, which meets the provisional qualifying standards for state, and just 1 second off the auto-qualifying mark. The time for the Mingus girls is the top-ranked time in the state for the 1600-meter relay.

The other top performance for the Marauder girls came from freshman Natalee Rogers, who clocked in at 13.78 seconds into a 2.4 mph headwind in the 100-meter dash, which this week ranks as the 15th fastest Division 3 time in the state. Rogers also ran her first 400 Saturday as part of the 1600-relay quartet, and turned in a 64-second effort.

For the Mingus boys, junior Kendrew Streck has the best Division 3 discus throw in the state with a 132-foot, 2-inch effort, which is just three inches off the automatic qualifying standard. Streck is also ranked second in the state among Division 3 shot put specialists with a best throw of 44-5, a shade under the auto qualifying mark of 45-1.

Also for the Mingus boys, the 4X400 relay quartet of Colby Fanning, Taylor Capite, Dallin Gordon and Jonathan Jung are ranked 8th in the state with a 4:42.27 performance, which is 1 second inside the Division 3 provisional standard for the state meet.

Also, Mingus 4X800 relay squad of Joseph Calhoun, Lucas Doerksen, Taylor Capite and freshman Riley Bliss is ranked 9th among Division 3 schools, but has yet to meet the provisional standards for state.