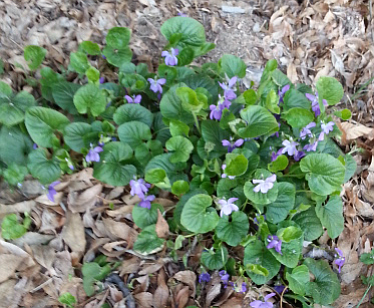 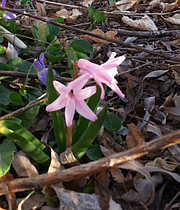 What a gorgeous spring day it was today. Not quite as nice as the weekend, which was the PERFECT. What could be better than twenty-four hours of sweet gentle spring rain?

Although the clouds lingered, making me wish for more rain, today it warmed up to more than 80 degrees. That made it humid, the heat teasing up both worms and moisture from the ground, and making every bud on every tree swell. The Cottonwood branches appear a fuzzy yellow-green as their leaf buds drop their husks. Those husks are sticky little things. One of the ram lambs was wearing a few in his wool this morning.

The fruit trees have also taken notice of the change of season. Three of my peaches are putting on a show, as are a few of my Satsuma plums. Two are among my newest trees, planted only last year. Wouldn't it be something if they set on this year?

Oh wait. I'm most likely not going to be here to pick the fruit, am I? Ah well. I'm still thrilled they're doing so well. I'm equally thrilled to see blooms on one of my oldest trees, another Satsuma in the orchard. That poor tree was down to one living branch when I arrived. It's now flourishing, having added several feet in height and more than twenty strong branches.

Other flowers are bursting out all over the place. The day lilies have clearly established themselves. I think they've at least doubled their number. The irises are recovering. I had to replant them after the piggy girls dug them out of their original bed. Also last year, I split my one hyacinth bulb. It was a gift from someone. Like all bulbs, they grow like garlic, forming cloves. I spread the hyacinth cloves all over my upper garden. Perhaps I should have waited another year. Each new plant is tiny with only a couple of bells on each stem.

I'm enjoying my first daffodil bloom, or at least the first one to fully flower. There was an earlier bud. Unfortunately, it ended up in a sheep gullet. And here I thought daffodils were toxic. Perhaps they are but they don't affect sheep. I've seen the sheep nibbling at the poison ivy without any reaction.

The saying might be that violets are shy, but that isn't true here. Although it took me two summers to get them established, since then they have proved bold little things. I adore them. As far as I'm concerned they could spread until they were the only plant on the property. Given enough time, I think that might happen.

It's not just the plants that increasing their numbers. I may have mentioned that back in October, just two months after her latest lambs were born, Tiny started kicking off her little guys, refusing to them nurse. I thought she was weaning them. She wasn't. For three days she offered herself to Cinco, then, when she was certain she was pregnant I suppose, she went right back to nursing her lambs. It's the first time I actually documented when she got herself pregnant. As for her boys, she didn't finally wean them until mid-January.

At any rate, I counted the weeks and marked late March as her due date. Sure enough, her udder, which had only recently started to flatten, is now filling again. All the signs are there. She'll produce lambs right on time.

Much to my surprise, Mari is also pregnant. She's such a quiet little thing, I never noticed her going into heat. I love that she's pregnant mostly because it means that her leg has healed, something I wasn't certain would ever happen. At the moment she looks like she's swallowed a watermelon that lodged sideways in her belly. It's a cute look on her, and, if her mother is any example, that means she's not due until mid-April. It looks like I'm going to have a serious flock soon.

And of course the turkey hens are feeling the need to nest as well. I'm grateful that none of them have looked to the blackberry wilds outside the fence. These girls are young and they want to stay close to home. However, the ravens have taken note. Two of them have been showing up every morning. Since there aren't any turkey eggs to steal yet, they've settled for taking the chicken eggs instead.

Imagine a string of really nasty curse words here. Ah well, chances are that I'll have neither fruit nor fowl from the farm this year. Happy Spring!