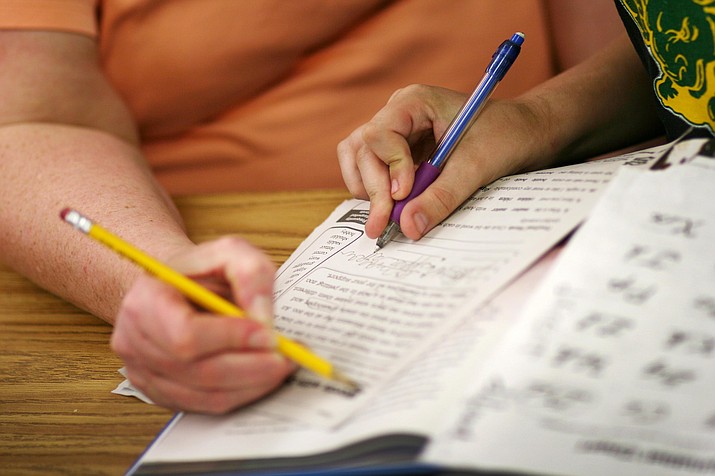 A recent study from the Arizona Auditor General’s Office has 53.8 cents of every dollar spent this past school year on instruction statewide, which includes salaries and benefits for teachers and aides as well as instructional supplies like pencils and paper, instructional software, athletics, band and choir. But one Verde Valley superintendent said it’s not so much about how you spend the money, but how much money is actually available to the schools. (VVN/Bill Helm)

If someone takes away your Thanksgiving dinner plate but later gives you back the roll and butter, you’re still going hungry.

At Cottonwood-Oak Creek School District, Superintendent Steve King said he’s pleased that his district has “shown improvements in how we allocate our dollars to the classroom.”

But the larger issue, as King unhesitantly puts it, is the “shameful defunding of our public schools by the policy makers of Arizona to further an ideological agenda that does not place children, families, and communities first.”

“While how we divide the pie of money is important,” King said, “what is of far larger importance is the size of the pie.”

In fiscal year 2015, however, the district spent 50.5 percent in the classroom.

At Camp Verde’s American Heritage Academy, Lance Barnes is none too pleased with the state’s commitment to education spending.

Calling the report “meaningless,” Barnes, the school’s second-year principal, said he is “much more concerned that Gov. Doug Ducey is claiming a dramatic increase in funding when Arizona classrooms are still funded under what they were 10 years ago.”

Despite the numbers, Barnes said that “almost every school and district [in the state] is doing their best to put as many dollars in the classroom as possible.”

“We try to use as much money as possible to hire highly effective staff,” Barnes said. “That’s our priority.”

Barnes also said that factors such as unexpected expenses make it seem as if schools are “diverting money from the classroom, an unforeseen consequence of all the money for education coming from the same pot.”

As president and CEO of Edkey Inc./Sequoia Schools, Mark Plitzuweit is at the top of the food chain for American Heritage Academy’s Camp Verde and Cottonwood campuses.

Responsible for being a numbers-man, Plitzuweit said the state’s schools can “only assume that these results are an accurate reflection of those specific schools.”

According to Plitzuweit, school funding will “still be an issue in the currently proposed budget and each school or district needs to do the best they can with the funding they receive.”

As with any school, Plitzuweit said that Edkey Inc. “has a focus on increasing wages at the school level and working on retaining quality educational professionals.”

But charter schools are funded about one-third less than their district counterparts. Although all schools want to pay their teachers more – and all teachers would like to be paid more – the folks at Edkey Inc. are “committed to fiscal responsibility with the funding available to increase compensation for all staff at our schools,” Plitzuweit said.

“Teachers increases are certainly a priority,” Plitzuweit said. “However, all those that work with students on each campus throughout the day should be fairly compensated as well.”

According to the Auditor General’s classroom spending report, Arizona classrooms spend $3,313 less than the national average.

If Arizona was at the national average, Clarkdale-Jerome School District – and its approximately 470 students – could have as much as another $1.557 million “that would go towards our bottom line budget,” said Danny Brown, the district’s superintendent.

It’s no surprise that Brown said Clarkdale-Jerome is “very efficient” with its funding.

“Although we want to strive to increase classroom spending,” Brown said, “our families should be pleased that we continue to be cost-efficient.”