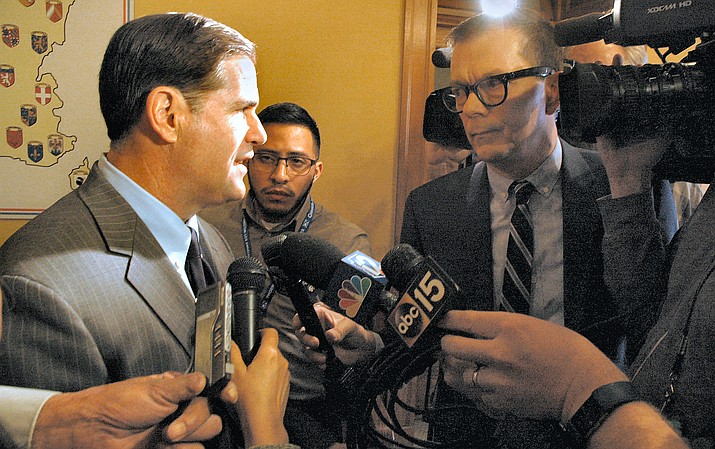 But some of the things he will propose when unveiling his plan Monday already are getting questions -- including a claim by the spokesman for the Citizens Defense League that “if the governor would bother to learn the laws he’s already sworn to uphold’’ he would know it’s not necessary to have a new statute to let judges seize weapons from those who are dangerous.

Ducey told Capitol Media Services several things in the new Florida law are off the table here, including:

• A three-day waiting period before someone can leave a gun dealer with a weapon;

• Raising the age to purchase any sort of weapon to 21;

• Banning ‘’bump stocks’’ that can effectively convert a legal semi-automatic rifle into a machine gun.

And Ducey is not interested in something not in the new Florida law: preventing people from buying weapons at gun shows without any proof that they are legally entitled to own them.

The common thread of what he will propose and what he will not, Ducey said, is separating out who should and should not have guns.

“The thing that I want to do is everything we can at the state level,’’ he said. “The federal government’s going to have a role in this as well.’’

That goes whether the Bureau of Alcohol, Tobacco, Firearms and Explosives will decide it can --and should -- declare bump stocks illegal because they create machine guns. While machine guns are not illegal, they can be possessed only by those who have undergone a far more extensive and lengthy background check than what is now required when a weapon is sold by a federally licensed firearm dealer.

“If something’s legal in one state in one state and illegal in another, it doesn’t do us much good in some of these settings,’’ the governor said. And that same logic applies to other things in the new Florida law, like the age restriction and the waiting period.

“We’re going to address what Arizona can address,’’ Ducey said.

One thing the governor said will be in his plan is additional funds for counselors “so that students can get the help they need before a tragedy occurs.’’

And Ducey wants more dollars for “school resource officers,’’ a program run through the state Department of Education that puts police officers who are specially trained onto campuses. The governor sees them as a first line of defense in active shooter situations.

“Cops protect people,’’ he said. “So when we can have good guys that can protect people in dangerous situations, we’re going to do that.’’

Sen. Lupe Contreras, D-Avondale, said there’s nothing wrong with the concept. But Contreras said he wants to be sure that the final decision on whether to put a cop in schools is left to individual districts and not mandated by the state.

“They’re asking for more school counselors, school counselors, social workers, people who are actually trained to catch youths in crisis who are experiencing higher rates of depression and anxiety,’’ she said. “The students do not want to see more guns on school campuses,’’ she said, even in the hands of police officers.

Rep. Reginald Bolding, D-Laveen, said schools in his own district would prefer to simply get the dollars and decide how best to use them.

One need, he said, is infrastructure to make schools more secure, particularly when there’s someone with a gun already roaming the halls. And Bolding has a very concrete example: changing classroom locks.

“In order for you to lock doors for many school buildings, you only can lock them from the outside,’’ Bolding said. “So if you have a potential gunman and you want to protect your classroom, you would have to go outside of the class to lock the door and then shut it.’’

Ducey also wants to allow judges to remove guns from the homes of people who are considered to be a danger to themselves or others.

But Charles Heller, spokesman for the Citizens Defense League, said state law already allows prosecutors to commit anyone who falls into that category. He said once people have been locked up for mental health reasons they are permanently banned under federal law from ever owning a gun.

“They’re a prohibited possessor,’’ Heller said. “If the governor would learn the laws he is sworn to uphold he would already know this.’’

He acknowledged, though, the county attorney actually has to ask federal prosecutors for a warrant to have ATF actually seize the gun.

Ducey brushed aside a question about whether he would meet with the students who came to his office on Wednesday but were left in the lobby to meet with an aide.