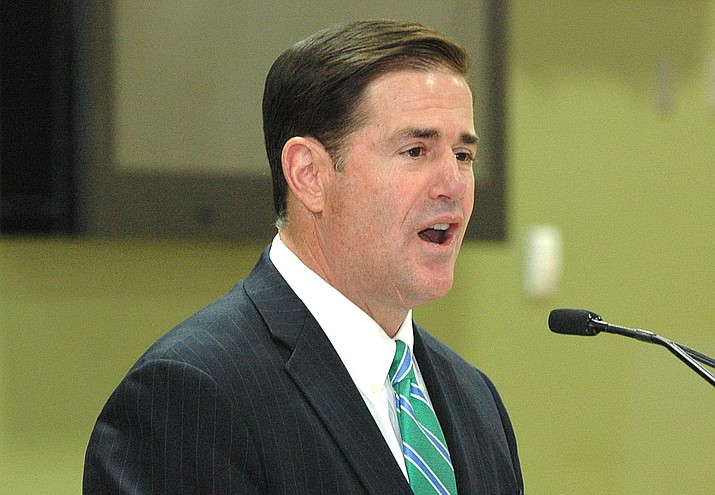 Phoenix — Gov. Doug Ducey wants to close some reporting loopholes to ensure more information is available when background checks are done of gun buyers but has no interest in requiring every weapon sale goes through that system.

In what the governor’s staff billed Monday as a comprehensive plan designed to deal with gun violence, Ducey is proposing to allow police to immediately take a weapon from someone they have “probable cause’’ to be a danger to self or others. A judge would have to have a hearing within 24 hours to determine whether the person needs treatment.

A parallel plan would permit family members, counselors, teachers and even roommates to petition a court for what Ducey is calling a Severe Threat Order of Protection. That would pave the way for a court hearing where a judge could order someone to be evaluated for up to 21 days, during which time the person could not purchase or possess a weapon.

The plan allows a six-month extension after a court order.

If a judge agrees, any guns have to be either removed from the house or locked up in a way that the person who is under a STOP order does not have access to them.

Gubernatorial policy adviser Daniel Ruiz said evidence from Arizona shows that could make a difference, citing the 2011 shooting of Congresswoman Gabrielle Giffords, an incident that results in the death of six others.

“Jared Loughner actually was feared by his parents,’’ Ruiz said. “His parent would take away his gun at night ... because they feared he was a danger to himself or to others.’’

She said they know which kids are having problems and could cause troubles. Wallace said permitting them to seek a court order will help them “get that young person help.’’

And gubernatorial press aide Daniel Scarpinato said anyone under a STOP order would not only lose access to his or her weapons but also would be entered into a federal database, making them ineligible to purchase a new gun in the interim.

“The governor does not believe that people who are dangerous or a threat should have weapons,’’ Scarpinato said.

But Rep. Randy Friese, D-Tucson, a trauma surgeon who treated Giffords after the shooting, said there’s a very obvious loophole to all of that: It leaves legal the ability of those who want a weapon to go to a gun show or any other private seller and obtain it, all without a background check.

“Why take away someone’s weapon who is dangerous and allow them to walk around the corner and buy one at a gun show without a background check,’’ Friese said.

For example, he said, the state’s own computerized criminal history database has less than two-thirds of the actual criminal records. That is due at least in part to what the governor’s staff says are “antiquated paper filing systems.’’

It is that state system that feeds into the national database used by gun dealers to determine if someone is legally entitled to have a weapon. This plan would put $600,000 a year for the next three years into updating the system, with the eventual goal of having criminal histories entered within 24 hours.

Rep. Daniel Hernandez, D-Tucson, who was an aide to Giffords and with her at the shooting, said this, too, comes up short as long as anyone can buy weapons at gun shows.

“If people don’t take part in the process and are not subject to a background check, then what good is it to invest $600,000 of Arizona taxpayer dollars to fix a system if you’re not going to make people use it,’’ he said.

Scarpinato brushed aside repeated questions about why if Ducey wants a better database to keep guns out of the hands of those who should not have them he would allow people to buy weapons outside that system. He said the governor’s concern is people who purchased their firearms legally and then went on to commit mass murders.

“That is where the problem lies and that is what this seeks to solve,’’ Scarpinato said.

And what of gun shows?

“This is what we’re addressing,’’ he responded. “This protects public safety and balancing that with the Second Amendment rights of Arizonans.’’

House Minority Leader Rebecca Rios, D-Phoenix, would not say whether she and fellow Democrats will support the plan as it is. Aside from the “gun show loophole,’’ they also want a ban on “bump stocks’’ which allow a semiautomatic weapon to fire hundreds of rounds a minute, something else not in the Ducey plan.

Other elements of what the governor is seeking have nothing to do with guns, at least not directly.

The plan proposes to allow public schools to bill the Medicaid program for mental health services for students whose family income qualifies them for the program. That is about $50,000 a year for a family of four.

Christina Corieri, the governor’s health policy adviser, said that will allow small school districts who do not have regular counselors to contract with someone, even on a part-time basis. For larger schools, she said the money they collect in Medicaid reimbursement would free up other dollars to provide more counselors for other students who are ineligible for the program.

Corieri figures that putting $2 million of state dollars into the program this coming school year will leverage another $6 million in federal funds.

There also is a plan to have more school resource officers -- police assigned to campuses -- though the governor’s staff had no dollar figures.

Wallace said they also are looking at some no-cost options, allowing schools to use retired police officers and others who are still certified law enforcement officers as volunteers. And the proposal suggests that schools make office space available for police, if for no other reason than having them do their paperwork there for other assignments means someone on or near the campus.

There also are proposals to ensure that schools have contingency plans in place of what to do in an “active shooter’’ situation.