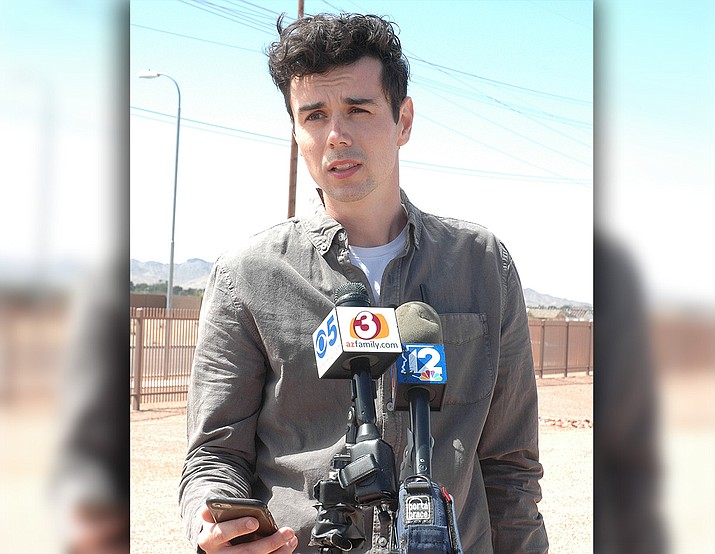 Noah Karvelis who helped organize Arizona Educators United explains Monday what's next for the newly formed group now that lawmakers have agreed to extend the 0.6-cent state sales tax that otherwise would have expired in 2021. (Capitol Media Services photo by Howard Fischer)

PHOENIX -- Gov. Doug Ducey inked his approval Monday to extending the 0.6-cent sales tax for education until 2041 as an education group which helped pressure for legislative action is mapping out what it plans to do to get some new money into classrooms -- including a possible strike.

Noah Karvelis, a music teacher at Tres Rios Elementary School in Tolleson, said the "Red for Ed'' demonstrations that may have helped push lawmakers and the governor to approve the extension will continue. But he said teachers are hoping for a broader agenda, including a demand that the tax cuts that have been annual features of the Ducey administration as well as of predecessor Jan Brewer come to a halt.

But that's not going to happen.

Gubernatorial press aide Daniel Scarpinato said his boss remains committed to a tax break for military retirees, exempting the first $10,000 of their pensions from state income tax. The figure is currently $2,500, the same as for retirees from other government agencies.

That carries a price tag of $15 million a year when fully implemented.

Scarpinato said Ducey is not interested in other cuts this year. But he said that the future of other tax breaks making their way through the legislature, including a reduction in taxes on capital gains being pushed by House Speaker J.D. Mesnard, R-Chandler, will have to be part of whatever deal Ducey reaches with GOP legislative leaders.

"We don't negotiate the budget in the media,'' he said.

Ducey was not pushing to extend the 0.6-cent levy in Proposition 301 this session. In fact, he wanted the question to go to the ballot -- and not this year when he is up for reelection.

But Rep. Doug Coleman, R-Apache Junction and Sen. Kate Brophy McGee, R-Phoenix, cobbled together a bipartisan coalition to get the the two-thirds vote of both chambers which was necessary as that, technically speaking, the extension is a new tax, taking over the moment the first one expires.

The legislative action also came amid grass-roots organization of teachers and students.

Much of it came together outside the scope of the Arizona Education Association. Instead teachers congealed around a Facebook page organized by Arizona Educators United formed in the wake of the West Virgnia teacher strike that got them a 5 percent pay hike.

Karvelis, who has become a spokesman for that group, said while extension of Proposition 301 is important, it should not be seen as moving the needle in teacher salaries.

Most immediately, there are plans for "walk-ins'' on Wednesday, before school hours, to gin up community support. But Karvelis said the situation may call for more.

"Our backs are against the wall, change needs to happen,'' he said.

"We don't want to go on strike,'' Karvelis said. "But if that's what it ultimately takes we are prepared to essentially do that.''

Ducey's signature on the tax extension came at a closed-door event -- no reporters allowed in to ask questions -- with legislative leaders and former Gov. Jane Hull. She was a key architect of the original Proposition 301 and pushed voters in 2000 to approve the 0.6-cent surcharge on the state's 5 percent sales tax rate.

But Hull had to agree to a 20-year self-destruct provision to get lawmakers to put the issue on the ballot. Absent what lawmakers approved last week and Ducey signed Monday, the last of the $667 million would have been collected in June 2021.

Schools now get about $384 million of the total collected for teacher salaries, with some of the rest for for universities and community colleges. But there's also $64 million earmarked to help pay off money borrowed for new school buildings.

Those bonds will be paid off by 2021. The new version puts that into teacher salaries.

While Democrats supported the extension, they made it clear that none of this does anything to meaningfully lift teacher salaries from at or near the bottom of the various national rankings. Several said that additional $64 million translates out to about $18 a week per teacher, before taxes.

That includes a proposal to restore $371 million in the "district additional assistance'' account that pays for things like computers, books and school buses. Strictly speaking, this isn't new money but simply restoring what lawmakers failed to fund for years, including $117 million cut by Ducey himself his first year in office.

Scarpinato also mentioned voter approval in 2016 of Proposition 123 which adds about $300 million a year to school funding.

But that was to settle a 2010 lawsuit filed by school districts after the state ignored the other key provision of Proposition 301: Increasing state aid to education annually to keep pace with inflation. Educators have put the settlement at about 70 percent of what the schools were owed.

What that leaves going forward is about $88 million for school construction, $35 million for repairs and repair plus another $34 million to pay for another 1 percent pay hike for teachers to match an identical increase instituted this school year.

Scarpinato did not dispute that does not change the state's ranking for how it pays its teachers. But he said all the funds have boosted average pay by about 4 percent and provided additional dollars for schools to hire new teachers.