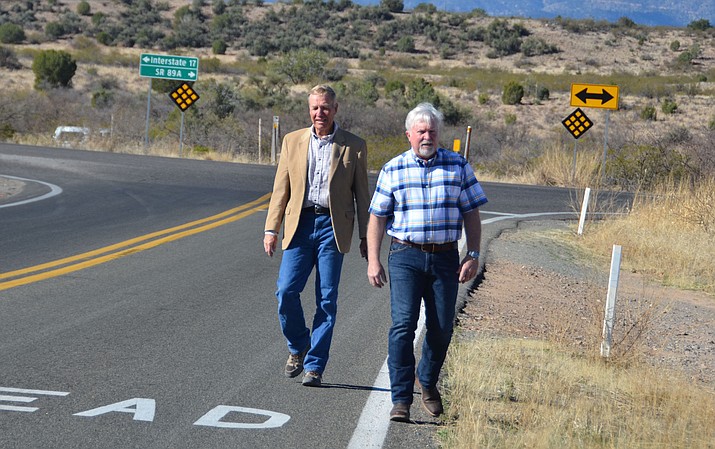 Supervisors Thomas Thurman and Randy Garrison meet on Beaverhead Flats Road and East Cornville Road where they want to extend Beaver Flats Road across the Verde River to SR260 in Camp Verde or Cottonwood. (pictured behind them in photo). VVN/Vyto Starinskas

Yavapai County Supervisors Thomas Thurman and Randy Garrison patiently stood on Beaverhead Flats Road and Cornville Road last week as traffic backed up at the stop sign. They pointed to the traffic and said this is why something needed to be done in the Verde Valley.

The supervisors have a new long-range plan to connect Beaverhead Flats Road in Cornville to SR260 on the Camp Verde/Cottonwood side. The new connector road would cross the Verde River and come out somewhere between the two roundabouts at the Out of Africa Wildlife Park and Thousand Trails Road.

Right now, the project is only in the initial planning process, and Garrison said the supervisors are working with an engineering group to submit a design concept report that will determine the most efficient options for the road and bridge, which Thurman said he hoped would include a river-access point.

“That’s what they are hired for. It’s $1.1 million (for the report), it’s six miles here to 260 and it’s about five miles to the Middle Verde Road,” Garrison said, expecting the report to be done this time next year. The road could take five to seven years to construct.

Included in the planning is a multi-million-dollar, multi-level bridge over the Verde River. Currently there are no bridges for 16 miles between Cottonwood and Interstate 17 in Camp Verde, they pointed out.

“179 is definitely a problem going into Sedona and this will help relieve that,” Garrison said. Also, the new road will be a connection for local drivers, he added.

The supervisors said they preferred to do the first leg to the Middle Verde Road first because they don’t have the estimated $25 million in the funding yet for the bridge and entire road. What they have is the planning money to create the project.

“The problem is if we didn’t do the study, we couldn’t move forward with the program at any point whatsoever,” Garrison said.

An ADOT-assisted traffic study in 2016 looked at Verde Valley projects that could help traffic problem flows, Garrison said. It also looked at the 2040 population and where it would be living and working.

Garrison pointed out there are only two points where there are bridges along the Verde River and they are in Cottonwood and Interstate 17 - and that is a 16-mile span. Also, the new road will help traffic flow if SR179 shuts down for an accident. People can get to West Sedona by going on this road and then head to SR89A.

This is another “spoke in the wheel” and creates a much more efficient traffic pattern that will benefit everybody in the Upper Verde, Sedona and the Village of Oak Creek, Garrison said.

Thurman said they are getting complaints about too much traffic coming though Cornville also. Cornville, with all those curves, was not made for all the traffic it is getting, he added.

“Cornville is dangerous, if you get on the switchbacks on a mountain bike or a road bike,” Garrison added.

But, the engineering plan may determine that the best route would be a direct six-mile road from Beaverhead Flats Road, across the Verde River, to the roundabout at Thousand Trails instead. This would run mostly through Forest Service land.

The total Yavapai County regional road program is about $9 million this year and changes each year depending on sales tax fluctuations.

Thurman said it’s time to pave Beaver Creek Road from Montezuma Well in Rimrock to SR179 and Garrison said he is doing an in-house study to pave Ogden Ranch Road in Cottonwood to alleviate traffic problems on SR260.

Thurman said he and Garrison said they get about one-third of the Yavapai County road budget for their two supervisor districts. The newly proposed road would be in Thurman’s District 2, but Beaverhead Flats Road runs into Garrison’s 3 District.

The supervisors said this was not unusual for any long-term road project. They have to be planned many years in advance or the money won’t be available.

Thurman estimated it costs about $2 million to $3 million per mile to build a road today, but that could change.

One of the goals is to also construct the bridge for multi-uses, and make sure it’s friendly for horses, hikers, mountain bikers, ATVs and an opportunity to put in new hiking trails in the area. They said the area is “absolutely beautiful.”

Garrison said the two supervisors have been working with Coconino County officials to help with the regional traffic problem in the Uptown Sedona area also. “It’s tough. A lot of it is being loved to death,” he added.

Paving Schnebly Hill Road and building a bridge at Red Rock Crossing were two of the other possible ways the 2016 study looked at to help the traffic flow problems in the Verde Valley, Garrison said. But the Red Rock Crossing option was at the bottom of the list, Garrison added.

Thurman said SR179 should have been built with four lanes, but Garrison said the problem is that even if you make 179 four lanes, you still have to get through Uptown Sedona because it bottlenecks. The VOC to Sedona, there is no good answer, Thurman said.

The City of Sedona has initiated its own campaign to address traffic flows called: “Sedona in Motion,” which is under their Transportation Master Plan.

“All of the projects will be funded by a temporary half-cent Transportation Privilege Tax, a sales tax that took effect March 1, 2018. Tax revenues, 60 percent of which will be paid by visitors, will be spent solely on transportation projects,” the Sedona in Motion webpage explains.

Sedona also lists numerous projects they are considering to help the traffic flow in Sedona. Their transportation plan is based on “citizen input; data collection; engineering studies and drawings” and other factors.

“Yavapai County is going to do what we can do at our level to help the Verde, what happens in Coconino, and with ADOT and the Sedona area, we have no part of that,” Thurman said.

Garrison said they are still looking at ADOT to put in signs on Interstate 17 informing motorists how many minutes it will take to get to Sedona from different exits. “It’s in process,” Garrison said.

Thurman suggested that the SR260 and 89A intersection in Cottonwood was a possible missed opportunity, pointing out that ADOT may have been able to buy the former Cottonwood Chamber of Commerce building and the former Sizzler property and improve the intersection.

“This project is massive (the Beaverhead Flats Road Extension),” Garrison said. “The only way we are going to accomplish any part of it … we have to bring in partners.”

“The door is open right now. The world is sitting there waiting for us to figure out how to do this and what it’s going to cost,” Garrison pointed out.