Frosh lead CV softball to another 20-something run win 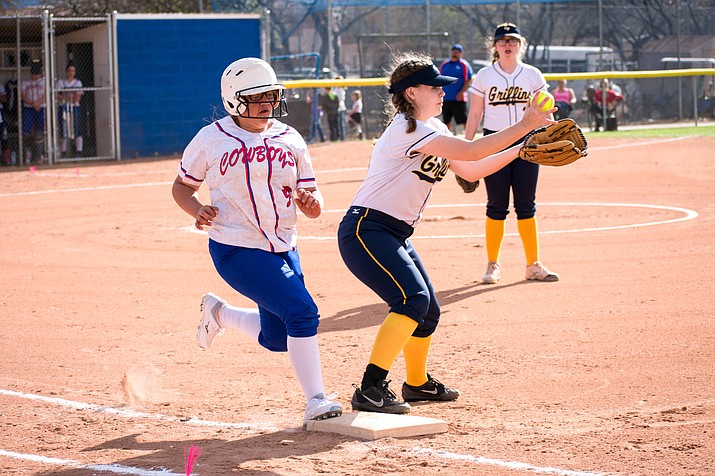 Camp Verde freshman Naydeline Barrada runs to first during the Cowboys’ 25-2 win over Glendale Prep on Tuesday at home. Barrada scored a run and had an RBI. (VVN/Halie Chavez)

Camp Verde High softball cruised to another dominant victory on Tuesday afternoon, this time with a slew of younger players.

“It was a really good time for our younger players to come in and get some action,” said CV head coach Henry Smith. “We had Tierney and Paige and Chelsea Battise, we have a senior player that’s new, (senior outfielder/first baseman) Skylar (Russell), JoJo got to pitch, so a lot of the younger players got to come in and contribute.”

The Cowboys had a week between their 21-0 win over Tonopah Valley and the GPA game after playing seven games in three days at the Gracie Lee Haught Classic in Payson.

“We had a really good couple days of practice and we worked on the importance of the players that don’t get a lot of playing time,” Smith said. “We made sure that they understood that their role is so important and I think this week they kinda realized that’s not so much about field time but what you can do for your team and starting out Monday, Tuesday, I think they realized that and really started hitting well in practice and giving their defense a good, hard work out and basically they earned some playing time for (Tuesday’s) game.”

The victory also saw the return of Cowsert, who had been out until last week. Cowsert gave Finley a break.

“I was proud of them to be able to listen and learn, execute what I’m teaching in a game situation,” Smith said. “Jacy was able to get a bit of a break.”

The Cowboys scored eight runs in the first inning, seven in the second and five in the third and fourth. They had 21 hits.

“As a team everybody hit well, we played good,” Smith said. “The challenge though is not so much about winning and losing but staying disciplined through out the game and I think we did well with that.”

Their next game is on Tuesday at 3:45 p.m. at No. 5 Surprise Paradise Honors.