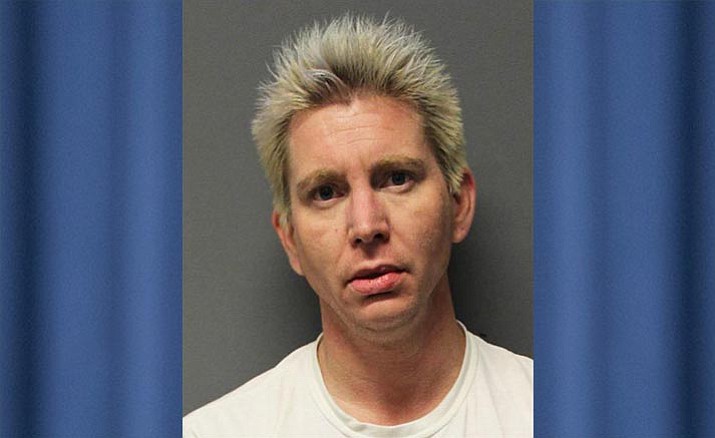 CAMP VERDE – One of two men involved in a child exploitation case was sentenced to eight years in the department of corrections this week.

Richard Byard Sumner pleaded guilty to three counts of exploitation of a minor in December of last year. His attorney, Jonathan Cochran, asked the court to grant Sumner probation.

Sumner and his then-husband, Gary “Jay” Zimmerman, were both indicted on charges of child exploitation after law enforcement received sexually-explicit photos Sumner took of a minor in the Village of Oak Creek in 2014.

A woman Sumner knew received the photos from Sumner. She then delivered the photos on a CD to the Yavapai County Sheriff’s Office.

An investigation uncovered the photographic evidence during service of search warrants in Long Beach, California, where Sumner was residing at the time of his arrest. He was extradited to Yavapai County.

State prosecutor Ethan Wolfinger confirmed that despite Sumner traveling with the photos on a cell phone and laptop across states lines from Arizona to California, it was unlikely that Sumner will face federal charges. All of the photos had been taken in Yavapai County, according to Wolfinger.

It was later determined that the victim was a minor older 15, not younger as the State previously determined. The prosecution determined through interviews the victim turned 15 two weeks before the incident.

The sentencing range for Sumner ranged from seven years of probation to 12.5 years of prison.

Wolfinger described the victim as “resilient” and did not cite emotional damage as an aggravating circumstance.

“The State would submit there really aren’t mitigating circumstances … The [victim] coming into their lives was an opportunity for them to get sexual pleasure from taking advantage of a child. And I think that is the type of conduct that warrants a prison sentence,” Wolfinger said.

Cochran told the court his client intended to use the photos against his ex-husband, Gary Zimmerman.

“This incident with the photographs began with the intent of Mr. Sumner having images to bring Mr. Zimmerman’s conduct to light. Unfortunately, Mr. Zimmerman caught him, and in the context of a very violent and very abusive relationship, Mr. Zimmerman used that violence and manipulation to get Mr. Sumner to take additional photographs,” Cochran said.

Judge Michael Bluff asked Sumner what he had to say.

“I truly regret not having the courage to come forward with this at the time … I see now where I could’ve done things differently. I could’ve turned in these photos earlier,” Sumner said. “When I saw him with the victim that was the end of my marriage. I’m truly sorry.”

Bluff told Sumner he was “fortunate” the victim was over the age of 15.

“I send a lot of young men to prison for most of their lives for looking at pictures – and you created them,” Bluff said.

Bluff determined emotional damage to the victim was indeed an aggravating factor, citing body language of the victim in the video interview with Wolfinger. He did not find any mitigating factors.

“I also reviewed the video of the victim and I do find there was emotional harm to [the victim.] He seems to be doing OK, but I watched his mannerisms, I watched the way he answered questions – he’s not OK.”

Sumner was sentenced to a slightly aggravated term of eight years of prison as well as lifetime probation upon release. His co-defendant and ex-husband, Gary Zimmerman, is scheduled to be sentenced April 4.