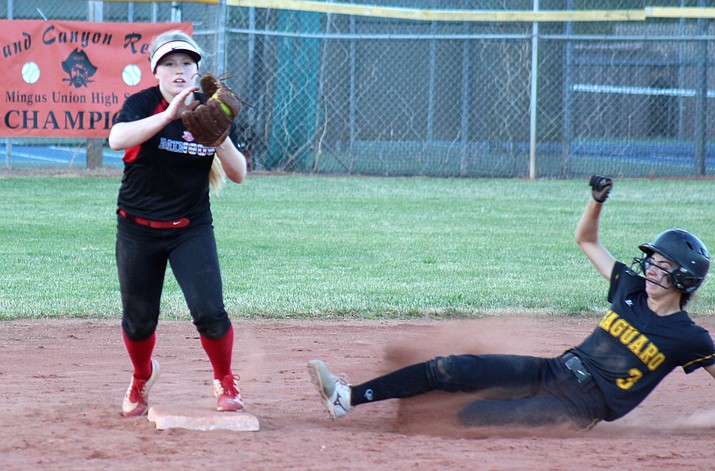 Mingus junior Ashley McCracken forces out a runner during the Marauders’ 9-1 win over Scottsdale Saguaro. Mingus Union debuted at seventh in the first rankings of the season and have since risen to No. 4. (VVN/James Kelley)

On Tuesday the AIA released their first baseball and softball rankings of the season and they were kind to Verde Valley teams.

In Tuesday’s rankings, the Camp Verde and Mingus Union baseball and softball teams were all at least 19th in the standings, with the softball teams in the top seven.

Mingus Union baseball was No. 16, MUHS softball was No. 7, Camp Verde baseball 19th and CV softball third in the initial rankings.

“It’s great to have the baseball teams high,” said Camp Verde baseball head coach Will Davis. “It says a lot for the Little League programs and the middle school programs. They’re sending us quality kids, so even on a year when we’re young, we’re still competitive.”

In Thursday’s updated rankings, Mingus Union baseball was No. 13, Marauder softball was fourth, Camp Verde baseball No. 17 and CV softball No. 3.

Camp Verde baseball’s ranking comes despite losing 10 seniors from the 2017 season and not having any this year.

“Baseball I was real excited about, very encouraged,” said CV athletic director Mark Showers. “This is supposed to be a rebuilding year and they’re hanging right in there. They’re competing well. The kids and the coaches are doing a great job. I was very encouraged especially by the baseball ranking but having both of our spring sports doing as well as they are that’s real positive and we have great kids some of them were (CV boys basketball head coach) Dan’s (Wall) and mine in basketball and they’re just good kids, they work hard.”

If not for their shock defeat to Scottsdale Prep on March 22, the Cowboys could have been higher.

“We’re where we expected to be,” Davis said. “We don’t have that one game where we fall on our face against Scottsdale, we’re in top 16, which is where we are.”

Sedona Red Rock baseball is No. 23 and their softball team is No. 16.

Last season all four teams made the playoffs and Camp Verde softball made the state semifinals.

“The softball team we knew was going to be ranked high and because of the won/loss I thought they might be ranked a little bit lower but it’s nice that they’re three and I talked to (CV head softball coach) Henry (Smith) about targeting that, especially for the state playoffs because obviously there are certain schools you don’t want to see in the opening rounds,” Showers said.

“I looked at his team and gave us a goal and I’ve always looked to john as inspiration,” Smith said.

“In small schools we talk about athletics being cyclical and you can’t really predict what kind of talent you’re going to have from year to year so to be able to be consistent in a down year like baseball is, that’s great,” Showers said. “Our softball team has been very successful for a long time, so Henry’s keeping that tradition going, which is great.”