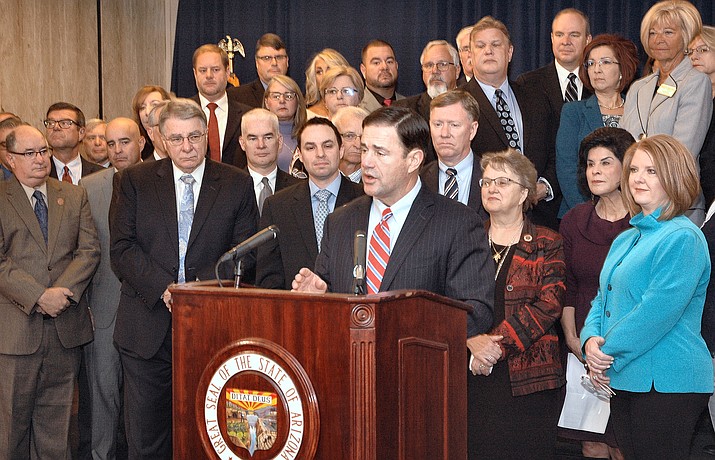 But not necessarily all teachers.

The final version of the budget deal negotiated between GOP leaders and Gov. Doug Ducey puts $273 million into the $10.4 billion spending plan for the coming year specifically for teacher pay hikes.

But unlike Ducey’s original proposal, each school district will get its share as a bulk dollar amount. That then leaves it up to board members to decide how to divide it up.

What that could mean is a larger bump at the bottom of the pay scale, both to attract new teachers and keep them in the profession. The state Department of Education estimates that 40 percent of new teachers leave after two years.

Some of that is because the job isn’t what they expected or other non-financial issues like workload. But state schools chief Diane Douglas, who has been a prime proponent of higher pay for teachers for years, has said that money is clearly a factor.

That same plan for bulk salary grants to school districts also will apply for the 5 percent pay hike proposed for the following school year and an additional 5 percent the year after that.

Along with that flexibility, the spending plan unveiled Monday also calls for more transparency, with new requirements for school districts to annually report on their websites their average teacher salaries. House Speaker J.D. Mesnard said that ensures “this is all out there for people to see.’’

None of this satisfied educators who remained on strike for a third day on Monday as they marched around the Capitol in what they hope will be a successful effort to convince lawmakers not to adopt the budget and pay-hike plan that Ducey has proposed.

And all indications are that many teachers will remain on strike through at least today -- and possibly until the budget is enacted at the end of the week.

Ducey and Republican lawmakers question the protests, pointing out it provides fort a 19 percent increase in teacher pay, at least on average.

But education groups are not confident that the funds will be there, particularly in out years, leaving open the possibility a future governor and future lawmakers could rescind the promise.

Ducey counters that his budget includes $100 million in additional district assistance, money that schools can spend on whatever priorities they have, whether repairs or other pay increases. But that, however, is only part of $371 million a year schools are supposed to have been getting all along for books, computers, buses and other minor repairs.

But the biggest complaint is that state aid on a per-student basis is less now than it was a decade ago, even before the effects of inflation are considered. The education groups want that $1 billion difference restored.

That question of whether the funds will be there to finance higher teacher pay is what’s behind an initiative to hike personal income taxes, at least on the wealthiest Arizonans, in an effort to raise $620 million.

But David Lujan, who chairs the Invest in Education campaign, denied Monday that financing increased aid to education this way is a kind of class warfare.

“Right now, lower and middle-income people are paying a larger portion of their income in taxes,’’ he said. “I think this is a fair way to go.’’

In criticizing the plan, Glenn Hamer, president of the Arizona Chamber of Commerce and Industry, said that one big flaw is that there are not that many people in Arizona who are in those top tax brackets. The result, he contends, is that it would take only a few of the richest choosing to move -- or find other ways of shielding their income -- to drop the bottom out of the anticipated $620 million in annual revenues.

Lujan brushed that concern aside.

“The answer to volatility is making a more diverse economy,’’ he said.

“How do you get a more diverse economy?’’ Lujan continued. “One of the biggest ways is to invest in your public education system.’’

But the most recent figures from the state Department of Revenue -- from 2012 -- suggest there aren’t a lot of people at the top end of the income scale to bear the burden. It found there were fewer than 15,000 filers in Arizona with a federal adjusted gross income of more than $500,000 out of more than 2.4 million tax returns.