Sound Off: Jerome’s Gulch Radio makes way for new transmitter site
Station to temporality go off air for a week in June during transition 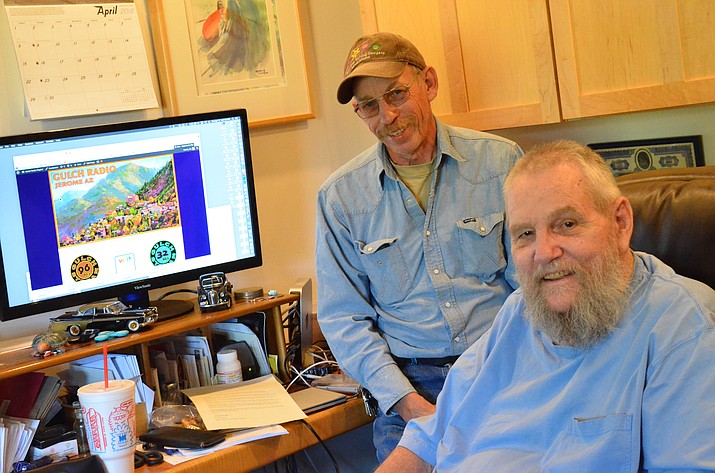 Owner Richard Martin, right, lives and sleeps with the radio station computers surrounding him at this Jerome home, which hangs from a cliff in the Gulch. Martin says he and partner, Chuck Ruynon, personally create the unique musical playlist. (VVN/Vyto Starinkas)

For more than three years, the radio station’s robust sound of Americana, blues and rock music have beamed throughout the Verde Valley to fans searching for an alternative to corporate radio.

For a while, people tuning in to Jerome Gulch at 100.5 on the radio were only getting the sound of silence during different times of the day and night.

Now, anyone turning on the radio station in their cars or on their home music systems will get a faint sound of music because of a weak signal.

Owner Richard Martin lives and sleeps with the radio station computers surrounding him at his Jerome home, which hangs from a cliff in the Gulch. Martin says he and partner Chuck Ruynon personally create the station’s unique musical playlist.

The 100-watt transmitter and small antenna for the community-licensed radio broadcast are actually located at the old Jerome High School and the signal is sent out to the Verde Valley. The radio program is first transmitted from Martin’s house in the Gulch to the transmitter at the old high school.

Martin said the Jerome Gulch’s lease is running out at the end of June at the old Jerome High School, and the landlord will not renew the lease.

Martin said the station will go off the air completely for about a week in late June when they will take the transmitter apart, he said. In the meantime, Martin said he already has filed with the Federal Communications Commission for approval to move the transmitter and he also will have to get town approval.

Currently, if you tune into the Gulch at 100.5 FM, radio listeners will pick up a faint signal. Martin said the station is running on lower power than the 100-watts until they move the transmitter.

The Gulch’s main transmitter has been damaged so they are now operating on a temporary transmitter and emitting a weaker signal, Martin said.

The Gulch Radio can also be picked up on the Internet, but Martin said most of their listeners were on the radio.

Martin said that he has received between 300 and 400 emails of support to continue the radio station, but realized it was going to take funding to move the transmitter, including all the engineering, FCC applications and hardware.

Normally a 100-watt community licensed station covers about five to six miles, but Jerome’s unique location amplifies the signal over the entire Verde Valley because of the height and clear atmosphere, Martin said.

The station was even being picked up on radio-survey numbers, Martin said, despite the station being a community-licensed station, which means that he cannot run advertisements. However, he can boost funding through fund-raisers and have sponsors such as public radio or a college radio station.

Martin never liked the fundraising aspect of the broadcast business. He provided the initial $15,000 investment to get the station off the ground four years ago, but now says he will accept donations to get the station going again.

“We would like to keep it on the air and we would like to think the people in the Verde Valley like it enough that they would be willing to help support it,” Martin said. “Our whole reason we built this was to put music in the Gulch.”

Martin said he has a button on the Gulch Radio website where people can make donations, which recently prompted a donation for a gulchradio.com listener from Wales.

Runyon said about 90 percent of Gulch Radio’s listeners were on the air and about 10 percent were on the internet.

“We’re getting letters (of support) every day,” Martin said.