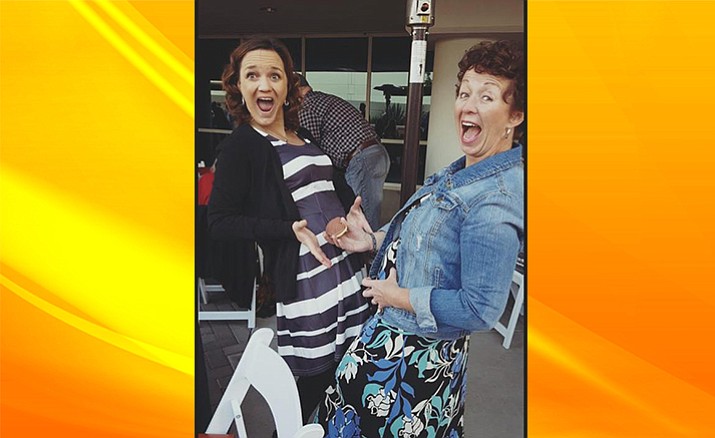 Kidney transplant recipient Katie Grannan, left, and kidney donor Amy Sperry, right. In Sperry’s mind, it was a miracle when she was deemed a match for Grannan, whose family she was acquainted with when she lived in Flagstaff before moving to Cornville in 2013. Courtesy photo

Amy Sperry didn’t put a lot of thought into the most valuable gift she had the power to give. She saw a social media appeal and made a phone call right away.

“My mind wasn’t involved at all, just my heart,” said Sperry, an academic advisor at the Yavapai College Verde Valley campus and Cornville resident who donated a kidney to a young woman in Flagstaff in dire need of the healthy organ.

Going on four years after making the life-saving sacrifice, Sperry now does a lot of thinking and a lot of talking about what she did and why – often to complete strangers.

“I want to encourage people who are curious… Let them know this is something that is done,” she said of kidney donations from one living human being to another. “It’s definitely part of who I am – letting people know about this.”

To help heighten awareness of the significant need for living organ donors, Sperry, “her kidney sister,” Katie Grannan, and her mother, Janell, are traveling to Chicago this month for a potentially world record-setting gathering of living organ donors. The gathering is in observance of National Donate Life Month.

Before submitting to tests to determine if she was an organ match for then 27-year-old Grannan, Sperry consulted with her husband, Mark, who had worked in real estate with Grannan’s father in Flagstaff.

She recalled Mark saying, “If you have the ability to maybe help save her life, I think that’s great.”

In Sperry’s mind, it was a miracle when she was deemed a match for Grannan, whose family she was acquainted with when she lived in Flagstaff before moving to Cornville in 2013. “Taking chances in life is what led me there (Flagstaff) and saying yes to the testing and the surgery,” Sperry said, explaining that she and Mark had moved to Flagstaff from Minnesota on a lark.

On Tuesday, Nov. 18, 2014, two months after saying “Let’s do it,” to the staff at St. Joseph Hospital’s Kidney Transplant Center in Phoenix, one of Sperry’s kidneys was removed in the morning and transplanted into Grannan in the afternoon.

Being an organ donor may not have changed Sperry physically, but it has changed her life. Advocating for living organ donations now demands much of her free time.

For information about kidney donations in Arizona, visit the Kidney Transplant Center at St. Joseph’s on the web.