Life in the Slow Lane: BA! 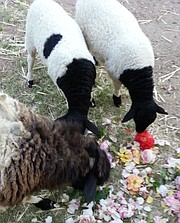 I've never owned a dumb farm animal. That's not dumb as in unintelligent. From the cows to the pigs to the turkeys, every one of my critters has proved capable of figuring out how to get what they want.

This is dumb as in the original meaning of the word: unable to speak.

All of my farm animals speak. Each species talk to each other, using in different tones and different vocalizations. Take my turkeys. Among the many noises the turkeys make are two specific calls for predators, one for earth-bound threats and one for the sky hunters. I'm always astounded when I hear the muttering chirp that indicates they seen a threat in the sky above them. I'll stare upward, scanning the vast blue expanse of Arizona's bright sky until I catch the tiny moving black dot.

Eagle-eye, my foot. The saying should be turkey-eyed.

Not only do they speak to each other, they sometimes speak to me. This happened recently with Tiny, my older ewe, who is proving to be a good bellwether, even though she's not a castrated male. I had my little flock up by the water tanks because the grass had grown in really well.

Bringing the sheep up to house level is always a coin toss. If I'm not careful--and sometimes even if I am--they'll break out and head directly for the gardens that I purposely keep out of their reach, which include the things they really love, like lettuce and roses.

This time I was sure I had them trapped. Using a small sledge hammer, I put up my poultry netting fence, driving the posts deep into the incredibly hard ground near the pump house. Because this area is sort of a driveway, so plumbers and such can drive down to the pump house, I haven't bothered trying to amend the soil. Instead, I planted arugula and chicory, and allowed the cardoon to take over for awhile, hoping their deep roots would break up the hardpan.

Poultry netting is meant to be electrified and I have a solar charger for it. The only problem is that the net's bottom line always ends up in contact with the ground. That's partly because the earth is so hard I have to drive the stakes deeper than recommended so they remain upright and resist attempts to push them down, and partly because my ground is uneven. At any rate, even if the charger works, at some point the fence grounds out and dies. Instead, I use it as a hopeful barrier. You know what they say about hope, how it springs eternal.

Until the other day only Tiny had ever managed to tangle herself in the netting. She's been really creative about how she's done it--weaving her head through whole different sections of fence and knotting herself into it. Getting her out has been an unpleasant experience for both of us.

This may explain what happened.

I was writing in my little office area in the kitchen. The door and windows were open. Haven't our recent wonderfully cool days been amazing? I'd checked on the sheep an hour or so earlier and saw them happily grazing around my new plum and cherry trees, doing a little selective pruning.

The call startles me out of the 12th Century. It's not trilling "baa-aa-aa" that I'm accustomed to hearing, but a definitive, harsh one-syllable sound.

I'm frowning at this point, wondering what Tiny is doing.

Ah! She's calling for me. I slipped on my shoes and left the house as she threw out her fourth and fifth call. Down the porch stairs I went and around the corner, heading for the passageway that crosses under the porch, leading to the pump house. She was at the opposite end of the passageway. With her head tilted to the side, she looked as though she'd been impatiently waiting for me.

Only then did I realize she's on the wrong side of the fence. My lettuce!

As she saw me, she once again uttered, "BA!" then turned and led me back to where my fence still stood. And there was Mari, her head caught in the netting. Unlike Tiny, she hadn't panicked at getting tangled.

Instead, she was grazing calmly on my salad bed.

Tiny stopped beside her daughter and looked at me as if to say, "What took you so long?"

That had me laughing. I disentangled shy Mari, who allowed me to do it with minimal resistance, then chased the sheep back down to the middle pastures. Later, I went out to dead-head my roses and brought the dying flowers to them as a treat. They earned it. After all, it seems they've named me the way I've named them.