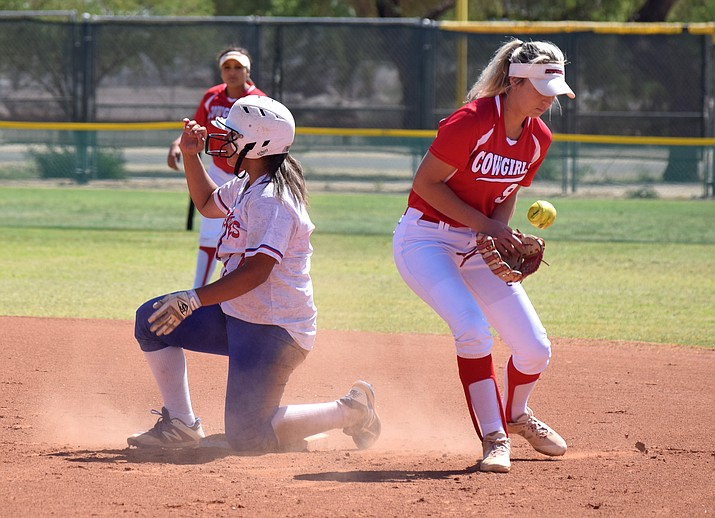 Camp Verde freshman infielder Jenna Huey celebrates after hitting a double during the Cowboys’ 3-0 win over Willcox on Saturday in Phoenix. (VVN/James Kelley)

Camp Verde junior infielder Tyra Smith gets a hit during the Cowboys’ 3-0 win over Willcox on Saturday in Phoenix. (VVN/James Kelley)

Camp Verde High softball punched its ticket to the state championship game with a 3-0 win over Willcox on Saturday.

The No. 2 Cowboys won their 15th straight game with their victory over the No. 3 Cowgirls at Rose Mofford Sports Complex in Phoenix. Sophomore pitcher Jacy Finley threw a three hitter and struck out 12.

“It was a good game,” CV head coach Henry Smith said. “At this point all the teams are pretty much evenly matched, so it’s just a matter of who can make the least amount of errors and what pitcher can stay more consistent and Jacy pitched a great game (Saturday), so that’s kinda what it came down to, a pitching duel and Jacy did well.”

Camp Verde faces No. 1 Benson for the state championship on Tuesday at 5:30 p.m. at Farrington Stadium at ASU. The game will be broadcast on nfhsnetwork.com.

Against Willcox, freshman outfielder Chelsey Battise scored to give the Cowboys a 1-0 lead in the second inning. Then in the sixth, sophomore first baseman/outfielder Hailey Moore hit an RBI triple and freshman infielder Jenna Huey knocked her in with a sacrifice fly.

“It’s just taking advantage of the opportunities and we’ve always talked about being patient and letting the game come to you and the girls were showing some maturity right now, so we knew we’re on a good heater and it feels good to see the girls execute something that we’ve worked on all season,” Smith said.

The Cowboys out hit the Cowgirls 6-3 and Willcox committed two errors. The Cowgirls had won five in a row.

“We stress the importance of working hard in the offseason, so that when it comes to this point, that they’re prepared to play and they’re ready, they’re ready to play and they’re not looking to prove anything, they’re just looking to play their best and that’s important for these young girls to understand that we’re just here to play for ourselves and that’s it, it’s not about anything other than our team, so they’re all in and ready to go for Tuesday’s game,” Smith said.

Benson won their semifinal 2-1 in eight innings over No. 4 Morenci. They went undefeated in power point games this year.

“We don’t know anything about them, we haven’t played any of those teams I know Benson’s good, everybody talks about how good they are,” Smith said after their semifinal but before Benson’s had ended.