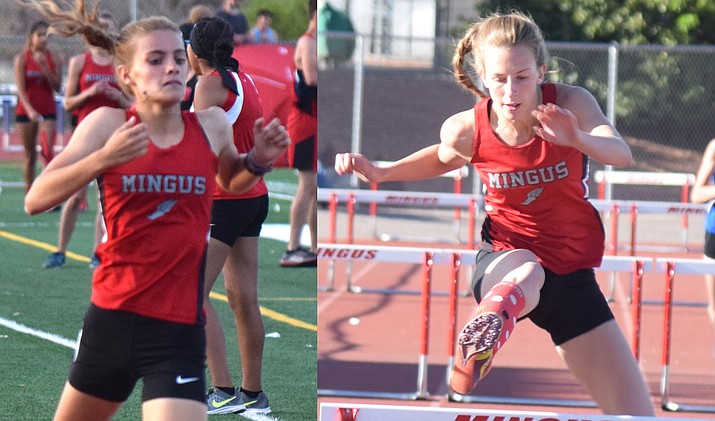 Mingus Union High School’s Hannah DeVore and Meg Babcock closed out their 2018 seasons Thursday at the annual Arizona Meet of Champions with the fastest races of their lives.

The Meet of Champions traditionally takes place within a week of Arizona’s four divisional state championships. While the state meet is broken up in four divisions based on school enrollment, the Meet of Champions, hosted by Brophy Prep High School, allows the state’s premier athletes to go head to head against each other with no respect to division classification. Division 1, 2, 3 and 4 state champions, as well as the state’s best athletes who did not win a state title, meet in an Arizona season finale.

For Mingus senior Hannah DeVore, the 2018 Division 3 state champion in the 100-meter hurdles, she closed out her career in a third-place tie in her specialty event with a 15.17-second clocking, her fastest ever and only a scant .04 second off the Mingus school record.

One of the most versatile track athletes in Mingus history, DeVore qualified for state in both the 100- and 300-meter hurdle events, 100- and 200-yard dashes, 800-meter run, and both the 4X400 and 4X800 relays during her senior season. At state, she won the 100 hurdles, finished second in the 300 hurdles and ran the lead-off leg on the Marauders 4X400 team that finished third in Division 3.

Mingus’ other athlete in Thursday’s Meet of Champions was junior Meg Babcock, the 2018 Division 3 state champion in the 400-meter dash.

Babcock did not contest the 400 Thursday, but instead opted for her primary race, the 800 meters. Babcock finished a disappointing third in the 800 at state, but gained a degree of redemption Thursday by winning MOC in a season’s best 2:16.22. That time is the best recorded by a Division 3 runner in 2018, and No. 7 all classes combined. What’s more, her time established a Mingus school record, eclipsing the 2:17.35 recorded by Justine Taylor in the 2014 Arizona Meet of Champions.

Three runners broke the 2:20 barrier in Thursday’s race, with Valley Vista’s Dorian Nesby finishing second to Babcock in 2:18.36 and Chandler’s Becca Taylor was third in 2:19.09.

Also competing in Thursday’s Meet of Champions was Camp Verde’s excellent junior hurdler Christopher Holdgrafer. He was seventh overall in the 110-meter hurdles in 15.61 seconds, and 12th in the 300 hurdles in 42.45 seconds.

His time in the 110 hurdles was a personal record, while his 300 time was his second best of the year.