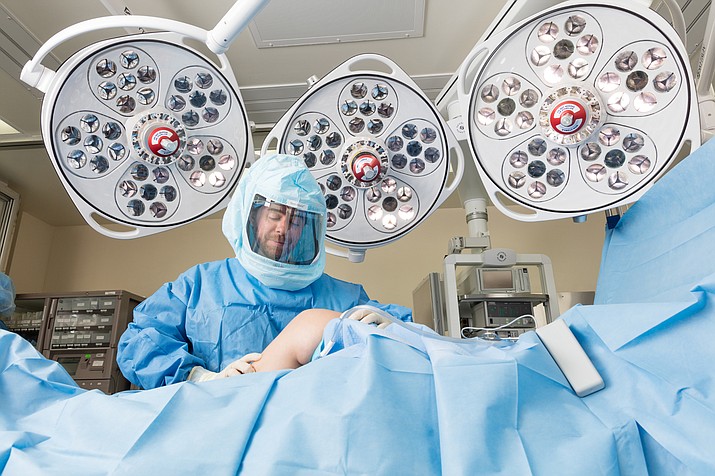 “There are only 102 hospitals out of 4,599, or 2.2 percent nationwide, that earned five stars,” Peet said. “It’s very prestigious for us to be a five-star hospital here at VVMC.”

Peet said before coming to the Verde Valley in January, she was the president and CEO of St. Anthony North Hospital in Westminster, Colorado, a 100-bed facility similar in size to VVMC.

Peet, a nurse by trade, said she’s very comfortable coming into organizations and identifying strengths and opportunities, and the five-star rating is a great example of VVMC’s strengths. “Something we are very, very proud of,” Peet said.

Barbara Dember resigned in 2016 as president and CEO of VVMC. VVMC Chief Nursing Officer Sue Maiden took over as an interim site administrator, according to NAH spokeswoman Trista MacVittie.

The hospital then hired Barbara Firminger as chief administrative officer before shifting her focus to other responsibilities at NAH, according to MacVittie. Peet was hired in January.

Peet has served in executive positions for the last 17 years.

Medicare collects a lot of data from hospitals, explained Peet, to make it “easy and seamless” for consumers to compare hospitals across the country. The study examines things such as emergency room wait time, patients’ experience, patient safety, quality outcome, effectiveness of care and other factors, she said. “You can click on other hospitals and see how we compare,” she said.

The Sedona medical facility is part of VVMC and falls under the five-star rating. NAH’s Flagstaff hospital received four stars.

The hospital has to report everything to Medicare as opposed to the private organization Leapfrog Hospital Safety Grades, to which hospitals also can submit specific data.

Peet said that VVMC did not submit data to Leapfrog so the hospital ended up with a “not necessarily an appropriate score.” Leapfrog has to rely on the data they have and make assumptions, she said. “The last time VVMC submitted data, the hospital received “A” ratings in 2015.

Northern Arizona Healthcare was created 21 years ago, according to MacVittie, when the Marcus J Lawrence Memorial Hospital in Cottonwood and the Flagstaff Medical Center partnered and NAH was born.

MacVittie said the two hospitals operated fairly independently until about five years ago but there has been a shift because NAH now offers so much more. She pointed to the out-patient clinics, the free-standing imaging center and the rehabilitation services as examples.

Peet said NAH will even begin offering behavioral health services at all four of its outpatient clinics.

Peet said Cottonwood has not lost its voice because there are five director positions from the Verde Valley on the NAH board. Five additional members from the Flagstaff market that sit on the board and two other members who are healthcare experts.

“They very intentionally made sure there was representation from the Verde Valley and the Flagstaff market,” Peet said. “And that it was comparable.” The community still has strong representation on the board, she added. They still have a board that represents them.

Peet said the hospital has many programs to reach out to the Verde Valley community such as health screening and healthy family programs that are focused on the improving the health of the community.

As far as the future of the VVMC is concerned, Peet said the hospital is launching a large strategic plan that will examine the Verde Valley communities and the demographics, the growth, and “what are the types of services that they are going to need. We know we have mostly age 50 and above.”

The plan will be for a three- to five-year period that will guide NAH on what kind of resources, services and facilities will be required to support it. The plan will go out to the community for review. This will set the “footprint” for the future, Peet pointed out.

The hospital is committed to keeping cardiac and orthopedic services in the community, which is important to an older population, Peet said.

General surgery and a high-performing emergency room are also critical services, she continued. The hospital recently invested over $2 million to make sure they had the right medical care providers in the emergency department, she said.

“The community told us in the past we have some issues there (the emergency department),” Peet said. “We listened so we made some major changes.” It really improved patient care, she added.

The hospital itself has plenty of building space, but some of it needs renovation, she said, adding that the strategic plan will determine that.

There has been a shortage of primary care providers such as doctors, nurse practitioners and physician assistants nationwide, and especially in rural areas such as the Verde Valley. NAH opened its four out-patient clinics to meet the need for primary-care services.

“We’ve increased access for the entire community,” Peet said. All of the primary-care clinics are accepting new patients.

“More and more healthcare is moving to the outpatient setting, so we are looking where we can really create that one-stop shopping patient experience like we have in Camp Verde,” she said. “That’s really what consumers want.”

“We really want to bring that model to Cottonwood.”