Another year for Camp Verde’s fifth day programs
School board approves $45,000 in extracurriculars 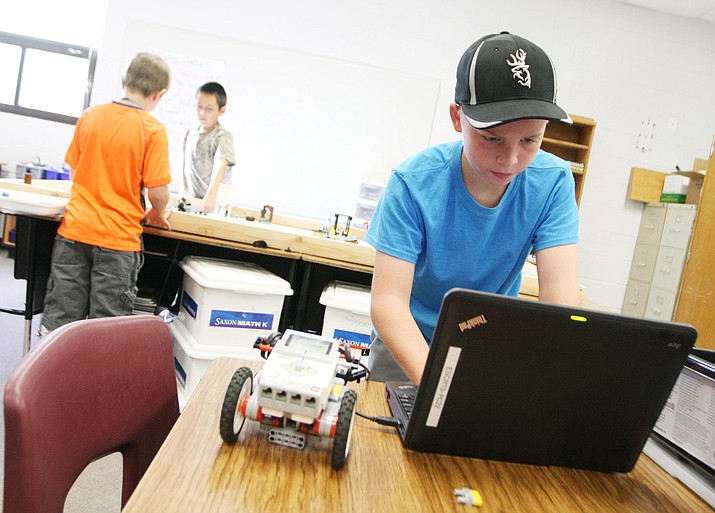 Robotics has been one of the most popular of Camp Verde Unified’s Friday Camps programs, says Fifth Day Program Coordinator Peggy Dickey. (Photo by Bill Helm)

Tuesday, the Camp Verde School Board voted 3-to-2 to approve an expenditure of as much as $45,000 to supplement the grants and donations committed to help run the Friday programs for the 2018-2019 school year.

Classes have included robotics, photography, technology, sports, butterfly gardening, board games, mathematics and reading tutoring, advanced mathematics, as well as sewing, art, culinary and ceramics, which “is one of our most popular,” said Fifth Day Program Coordinator Peggy Dickey.

As with the 2017-2018 school year, the aide by the school board will come from the budget’s cash accounts, according to board member Helen Freeman.

Though she said that she is “in favor” of the Fifth Day programs, Camp Verde School Board member Kitty McDowell said she would like to see “parents pay” for the programs to sustain themselves.

“Classroom size reduction, repair, almost anything academic,” McDowell said could be paid for with the $45,000 the board allocated to the Fifth Day programs. “We could take that money and make improvements for all students.”

McDowell and fellow board member Helen Freeman voted against the $45,000 allocation.

As she works toward making the program more self-sustaining, Dickey estimates that it takes “about $85,000” each school year to run the programs.

This figure, Dickey said, includes supplies and coaches, which is how the program refers to the teachers who lead each class.

Fortunately for Dickey, Friday Camps already have $13,000 in grants, and another $10,000 in tax credit donations and from Friday Camps fees this past year.

“The tax credit donations have been huge,” Dickey said.

Dickey said her goal is to secure at least another $17,000 in donations and/or grants that she would “like to have by September or October, to be on the safe side.”

“And I believe we will get it,” Dickey said.

Dickey also said that in June, she hopes to attend a Camp Verde Town Council meeting to solicit interest – and financial resources.

“We consider this a community service,” Dickey said. “Most of our community attends the schools.”

Anyone interested in donating their time as a Friday Camps coach, or donate money, can reach Peggy Dickey at 928-301-8141 or pdickey@campverdeschools.org.

This past year, the Friday Camps generated about $15,000 through tax credits, program fees and donations, Camp Verde Unified School District Business Manager Steve Hicks told the board Tuesday. The Friday programs serve about 200 students per semester on Fridays.

At Camp Verde Unified, only the district’s fourth grade and fifth-grade students will need to make up time lost when teachers walked out of class in response to the Red4Ed Movement.

Fourth- and fifth-graders will be in school an additional hour Monday through Thursday the week of May 14, according to the plans of Danny Howe, the district’s administrator in charge.

Though not up for board approval, Howe did discuss with the governing board the need for the scheduling change.

Fourth- and fifth-graders that week will take the later school bus run home with the Middle School and High School students.