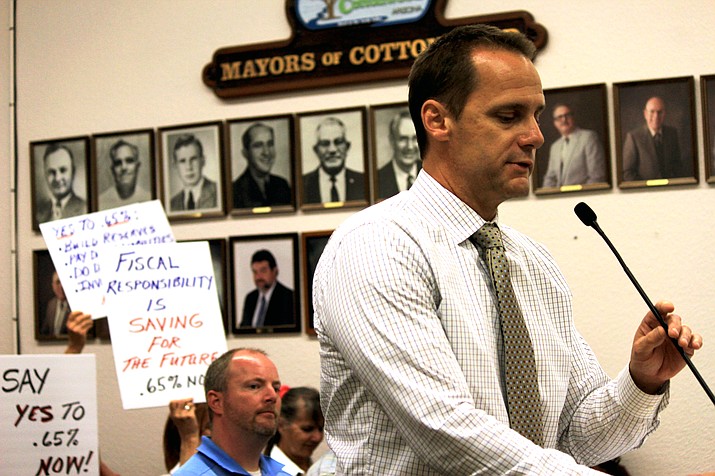 Cottonwood Police Chief Steve Gesell presents to council what a sales tax increase would do for Cottonwood PD during a work session last night. (VVN/Kelcie Grega)

COTTONWOOD -- Cottonwood City Council will decide whether or not to increase the city’s sales tax next Tuesday, and if so, how much.

Right now, Cottonwood has a 3-percent sales tax. Combined with the state and county sales tax, it is around 9.35 percent. This rate hovers slightly below average for the region.

A full-service city, Cottonwood is one of the only municipalities of its size in the region that doesn’t have a property tax or a special district tax.

“With the library, our biggest concern is keeping what we have intact as well as looking into the future,” he said. “If the tax does increase, that would help that existing program to bring in additional services to the community.”

Faust also said with that state’s recent minimum wage increase, employees on the lower end of the pay scale are being paid just above those working part-time.

Police Chief Steve Gesell told council that as a taxpayer who has lived in and served in communities similar to Cottonwood that an “increase in a sales tax makes sense in this situation particularly because we are a regional hub.”

“You have people coming in, they’re buying goods and services and they’re spending their money in our community and quite frankly, it makes sense from a taxpayer standpoint to spread the burden beyond our own resident population.”

Noting a need for future funding, Gesell also referenced Cottonwood PD’s strategic plan which includes the construction of a consolidated property and evidence facility with office space for IT and Fire.

During both work sessions on Tuesday and Thursday, members of the public gathered inside council chambers with signs advocating for a .65-percent sales tax increase. Historically, this is an unusual move for citizens in the Verde Valley. In 2015, the Town of Camp Verde voted 4-3 to increase its sales tax by .65 percent. This ignited a recall effort that targeted four council members who voted for the increase: then-Vice Mayor Bruce George, Mayor Charlie German, and council members Jessie Murdock and Robin Whatley.

While Cottonwood’s council chambers were filled with the public’s overwhelming support of a sales tax increase, not all constituents feel the same way, according to Council Member Deb Althouse.

“I’ve had people come up to me and say ‘I can’t believe you’re going to raise our sales tax and build a city hall,’” she said. “I don’t agree with the .65 percent increase, I think it’s too high.”

Another concern brought up by members of the public is how the sales tax affects groceries.

Phil Terbell, who owns a business in Cottonwood said during a call to the public Tuesday that he was concerned over how a potential sales tax increase would affect the price of food.

“That makes this a very regressive tax to the lowest income in our community,” he said. “I would consider that some consideration be put in there for removal of food tax.”

The issue of sales tax on food has been brought up to voters in the past with voters rejecting a repeal in 2001.

In an interview with the Verde Independent, Yavapai County Supervisor Randy Garrison, who used to serve on Cottonwood City Council said the city has gone out of its way to provide every department’s wish.

“They do it at an extreme,” he said. “At the end of the day, sometimes you just have to cut things. It’s the city’s financial responsibility to step back and look at what they can afford.”

For agendas and minutes, visit the City of Cottonwood website. Watch meetings online on the Verde Valley TV YouTube channel.