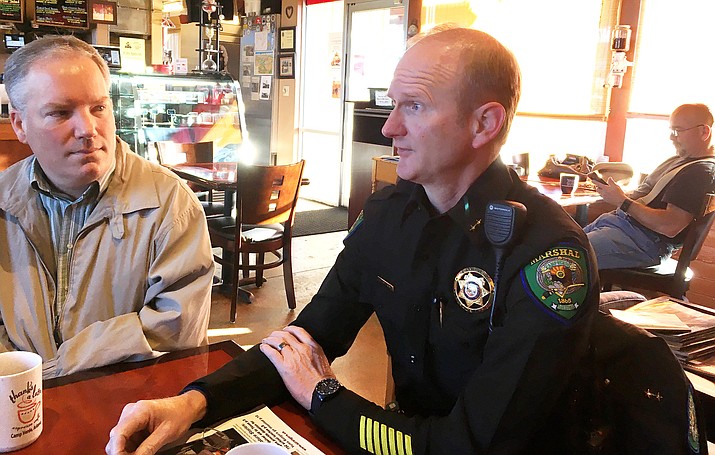 Camp Verde Town Manager Russ Martin, left, listens, as Commander Brian Armstrong of the Camp Verde Marshal’s Office talks during the monthly Coffee With a Cop, Monday at Thanks a Latte. (Photo by Bill Helm)

Armstrong, who has been interim marshal since late-October, is one of four candidates to replace Nancy Gardner, who resigned from the Camp Verde Marshal’s Office on March 12.

Hired in June 2017 to become commander at the Camp Verde Marshal’s Office, Armstrong came from Arizona Department of Transportation where he was lieutenant of the Enforcement Division.

Since 2014, Foster has been chief of the Bloomfield Police Department since 2014, and has also served with the Santa Fe County and Los Alamos County sheriff’s offices.

Thursday and Friday, the finalists will be available for a community meet and greet at 6 p.m. Thursday and at 9 a.m. Friday.

Friday morning’s gathering will be held in the Terra Cotta Room at the Camp Verde Community Library, located at 130 Black Bridge Road.