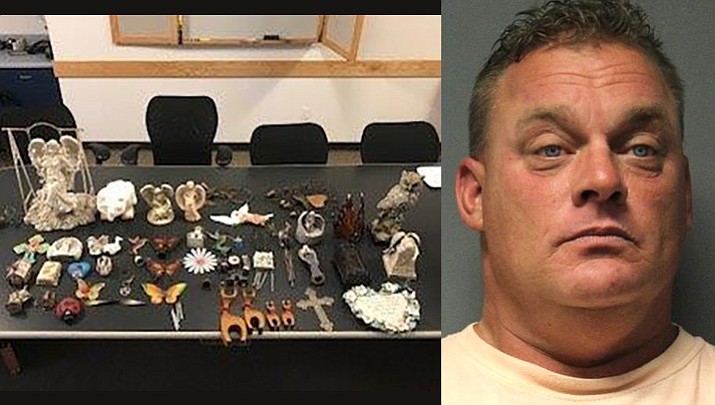 Mark Andrew Benassi, 42, Cottonwood, is accused of stealing more than 40 items from graves sites at the Cottonwood Cemetery and damaging headstones. Photos courtesy of Cottonwood PD

COTTONWOOD -- A Cottonwood man has been arrested and booked into the Yavapai County Jail on various misdemeanor charges stemming from a series of thefts at the Cottonwood Cemetery.

According to a news release from Cottonwood PD Sgt. Monica Kuhlt, police had received numerous reports in recent weeks of damaged headstones and stolen items from the cemetery located in the 500 block of North Main Street.

On May 4, a man who takes care of the Hispanic portion of the cemetery saw a man taking items from headstones. Earlier the same day, an officer was at the cemetery and spoke with 42-year-old Cottonwood resident Mark Andrew Benassi, said Kuhlt. Benassi allowed officers to search both him and his bag and at that time he did not have any stolen items in his possession.

A subsequent investigation, however, confirmed Benassi was the person stealing items and damaging headstones at the cemetery, said Kuhlt. A search of his residence recovered about 40 items that had been stolen from burial sites. Benassi was booked into jail on misdemeanor charges of theft and criminal damage.

“We began receiving reports on this in early May, but who knows how long it has been going on,” said Sgt. Kuhlt. “Based on the number of items recovered during the search of his home, we believe there are multiple victims, and some people may not even yet realize they are victims.”

Kuhlt advised residents to visit the Cottonwood PD Facebook page to view a full inventory of the items recorded during the search of Benassi’s residence. If an item is recognized and identified, contact Evidence Technician Tristica Kendall at (928) 340-2108 or tkendall@cottonwoodaz.gov.

The Verde Independent generally does not report the names of suspects charged with misdemeanor crimes. However, given the unusual nature of this case the publisher has made an exception.