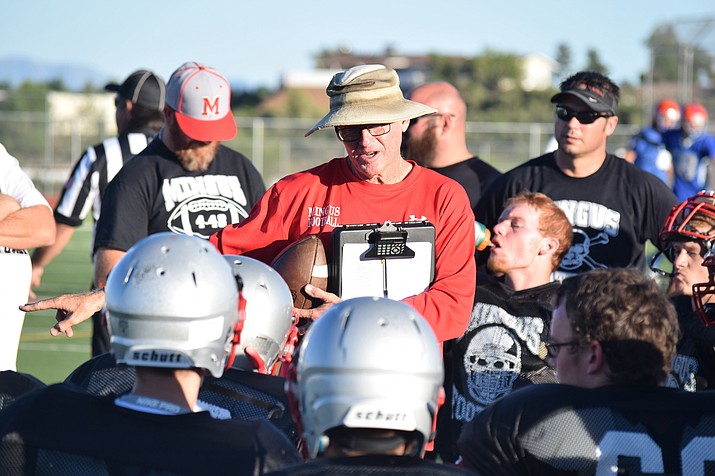 “It was just a good opportunity,” Young said. “We had a real good rivalry with them about 10 years ago, and I’ve always been impressed with their coaches and their kids are very respectful and it just seemed like a good opportunity and their head coach was looking for a defensive coordinator and I just thought it was a real good fit.”

The Saints and Marauders often matched up when NDP was in the 4A, most notably when Notre Dame Prep upset No. 1 Mingus Union in the 2007 4A-II state championship game.

Young resigned in March because he felt MUHS was being mismanaged.

After a rough 2016 season where the Saints went on probation and fired their head coach, they rebounded in 2017, going 13-1 and losing only in the 5A state title game.

However, NDP lost all they starters on defense.

“Yeah, they pretty much lost everybody on defense (laughs) but you know they’re a private school and they’re one of those situations where I think they just reload every year,” Young said. “All the sports programs are pretty strong.”

Young has been commuting from Verde Valley to the Valley of the Sun, attending a few of the Saints’ spring practices before taking up a bigger role.

In the spring he served as an assistant coach for the Mingus Union softball team.

“We got a house up here and the family’s up here, so I’ll commute and I got a place down there and my wife’ll come down a few days a week and I’ll come up here on weekends,” Young said. “We’ll kinda see how that works out and kind of go from there, there’s a lot of people that do that (laughs).”

Young coached at Mingus Union from 1986 to 1997 and then after a couple years at Mesa Westwood, returned to MUHS in 2000 and remained there except for spending a month at Prescott.

“We’re blessed to have him,” NDP football head coach George Prelock said to the Arizona Republic. “I have the most respect for Coach.”

Although Prelock didn’t have any varsity head coaching experience before he took over the Saints in 2017, he was an assistant when the won the 2007 and 2008 state titles.

“He’s a well-respected coach and I think him and I will mesh really well,” Young said.

Young is going to teach PE at NDP and in the spring assist with either baseball or softball.

He said not being head coach has its benefits.

In his first head coaching job at MUHS, he led the 1989 softball team to a 25-1 record and second place at State.

Young is expected to be succeeded by a pair of former players of his, Erick Quesada as head baseball coach and Robert Ortiz as head football coach. Quesada took over this season and as of press time, Ortiz has not been approved by the board yet.

“Mingus needs to get younger, it will be a good opportunity for some of these young guys to step up and move Mingus on to the next phase,” Young said.