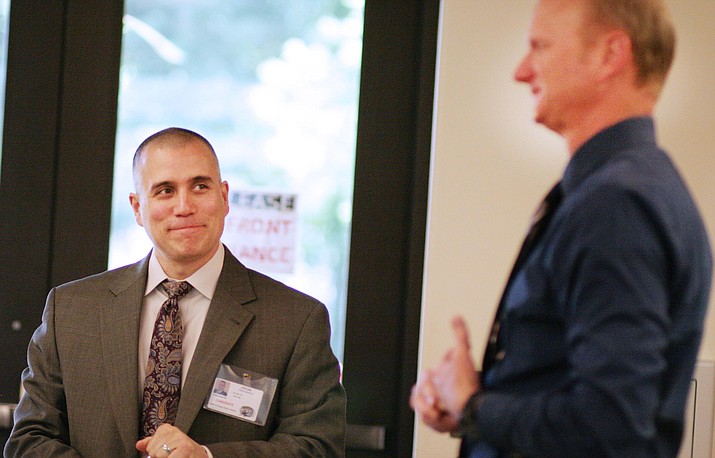 Bloomfield, New Mexico Police Chief Randy Foster said Friday that he “appreciate[s] the real community involvement” in Camp Verde. Foster is one of three candidates to become the Town of Camp Verde’s next marshal. (Photo by Bill Helm)

CAMP VERDE – Russ Martin said that by May 25, he would like to name the Town of Camp Verde’s next marshal.

“But with Memorial Day weekend, it may bleed into the week after that,” the Camp Verde Town manager said Friday.

Hired in June 2017 to become commander at the Camp Verde Marshal’s Office, Brian Armstrong has been interim marshal. One of the finalists to replace former marshal Nancy Gardner, Armstrong said that being the interim marshal has been “a really good experience.”

“I was lucky that Russ and council trusted me to watch the house during this process,” Armstrong said.

Though he worked with Gardner for only five months, Armstrong said the former marshal “was a good mentor.”

“From the very beginning, she took me to department head meetings and council meetings. By taking that step, she really prepared me,” Armstrong said. “Nancy did that for me, and it was really great. I am grateful for what she did.”

Whether or not Armstrong is Martin’s choice to permanently succeed Gardner, Armstrong said he’s the “lucky one, regardless.”

For Jason Negron, Allentown, Pennsylvania is home. Slightly north, in South Whitehall Township, Negron has been captain of the South Whitehall Police Department since 2015, where he has served in various capacities since 1999.

But Negron is no stranger to Arizona. Going on seven years, Negron has come to the Copper State at least once a year – and a year ago, Negron and his wife were married a year ago. And they obtained their marriage license in Camp Verde.

In the two days he has gotten to know the community – and the Town Manager – Negron said Friday that the Camp Verde Marshal’s Office is a “top-notch facility.”

“Russ has put a lot of thought into who would be involved in this process,” Negron said. “I’m excited at the prospect” of becoming the Camp Verde Marshal.

A shorter drive than Lehigh County, Randy Foster has been chief of the Bloomfield, New Mexico Police Department since 2014. Foster, who recognizes similarities between the Farmington area and the Verde Valley, said he “appreciate[s] the real community involvement” in Camp Verde.

“And the Town is looking to progress,” Foster said. There’s a plan for the town to grow and people support that.”

Initially, Martin had chosen four candidates to interview for the Town Marshal position. But Scott Peters of Dallas, Texas had to pull from consideration, Martin said.

This weekend, and moving through the upcoming week, Martin said that he will continue to solicit feedback from Town staff and from council.