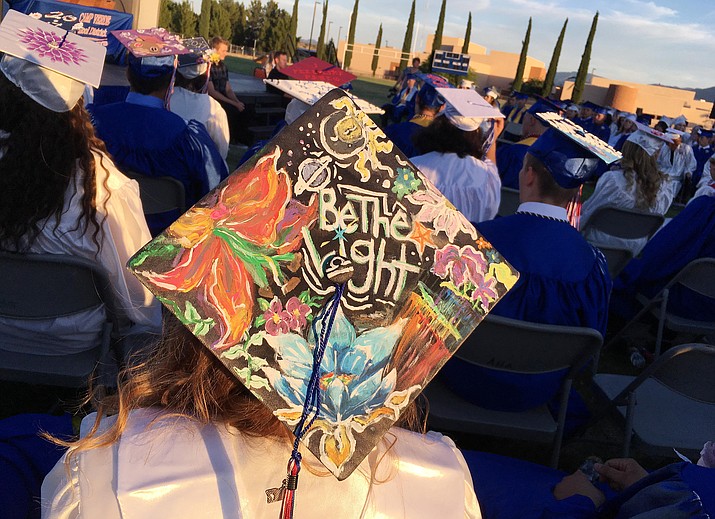 CAMP VERDE – A year ago, Camp Verde High School seniors pulled down a collective $642,136 at the annual awards and scholarship ceremony on May 17.

“A huge year” is how Camp Verde High School counselor Jane Mathews described the awards and scholarships earned by seniors.

“We’ve not had a year as big as this year,” Mathews said.

With 77 graduates this year and another nine from the district’s accommodation school, Camp Verde High School does not recognize the title of valedictorian, nor salutatorian. But the school will recognize its top 10 percent students, which are led by Preston Maynard and his 4.043 grade-point average, followed by Ani Steinhardt (4.024), Mazzie Jasman (4.023), Aaron Soto (3.978), Celeena Johnson (3.955), Chase Decker (3.930), Kimberly Oium (3.911) and Claudia Escobedo (3.917).

Though he has a $64,000 scholarship offer to attend Embry-Riddle Aeronautical University, Maynard is undecided at this time, Mathews said.

Soto, who received $50,756 in scholarships and awards, plans to study visual communication at Northern Arizona University.

Wright won an ASUS i5 computer with 8 gigabytes of ram, a 1-Terabyte hard drive, as well as upgraded video to a 1 gigabyte video card and a 21-inch monitor.

Wright won the computer as a result of a giveaway held by the new Camp Verde computer business.

“We at Memories I.T wanted to find a great way to get involved with our young adults in the community,” said Ira Piper, owner of Memories I.T. “We contacted Camp Verde High and the senior Class of 2018, with a computer giveaway. We received many great letters on how a computer would benefit them after graduation.”

Wright, who stated in the letter that he has a “physical disability which limits me to a wheelchair,” plans to attend online classes at Yavapai College.

“A computer will help me after graduation because I need the key to unlock the door to my success,” Wright stated in the computer contest letter.”

Camp Verde High School’s graduation begins at 7 p.m. Thursday on the Sam Hammerstrom football field. Entrance is off Apache Trail. Parking is limited, so arrive early for the best spot.

Graduation practice will be held at 8 a.m. Wednesday, also on the football field.

The middle school will promote 124 students from eighth grade to high school, including Valedictorian Jacob Oothoudt and co-salutatorians Corey Johnson and Quintin O’Grady.