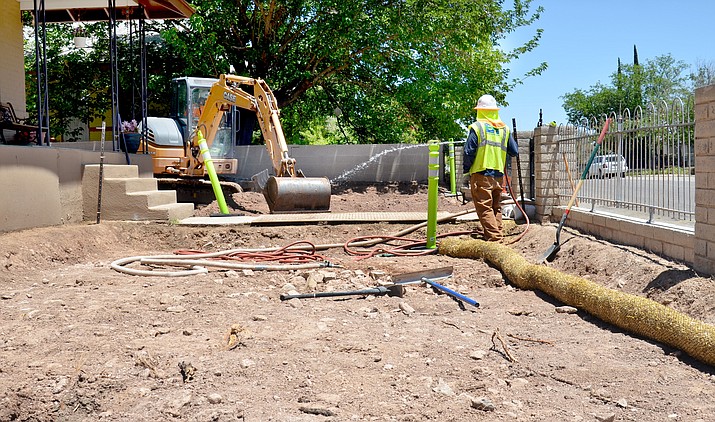 Cleanup crews began working on residential yards in Clarkdale this week on some of the 500 properties in Clarkdale in the United Verde Soil program. VVN/Vyto Starinskas

CLARKDALE -- Crews have begun digging up contaminated soil from some of the 500 properties in Clarkdale in the United Verde Soil program.

Meanwhile, the contaminated soil at the town park has been removed and replanting has begun, but the removed contaminated soil still can’t be relocated to a permanent location and has to be stored temporarily.

Soil contaminated with arsenic and lead from the nearby historical copper smelter is being removed in Clarkdale in the United Verde Soil program by the Freeport McMoRan company.

The contaminated soil is going to be treated and stored permanently at a repository site off Sycamore Canyon Road near the TAPCO access point next to the Verde River.

However, the soil that has been collected thus far is being trucked to a temporary soil-holding site about a half-mile up Sycamore Canyon Road from the Tuzigoot Road, Clarkdale Town Manager Gayle Mabery said.

Freeport McMoRan has a 3-acre site out there just to store the soil until they can move it to the permanent repository site, she said. They still have to execute the road maintenance agreement with Yavapai County and then they have to do the site prep, she said,

But they wanted to move forward on the Clarkdale Park so the town could have its popular events there this summer, Mabery said. So they needed a place to store the soil temporarily.

The company has a lot of site work to do to get the permanent site ready, she added

Freeport was also required to have a full storm-water management plan for the temporary site, approved by the town and the Arizona Department of Environmental Quality, Mabery added,

The Clarkdale copper smelter was operated by the United Verde Copper Company from 1915 to 1932 and by Phelps Dodge Corporation from 1935 to 1953.

As the corporate successor to Phelps Dodge Corporation, Freeport entered into the ADEQ Voluntary Remediation Program to investigate potential impacts to soil from historical smelter operations.

“Freeport and Yavapai County are addressing a road maintenance agreement for potential impacts from soil program haul trucks to Sycamore Canyon Road,” according to a Freeport McMoRan statement to the Verde Independent.

“We are also finalizing the design of the soil repository. Freeport is working diligently to complete these steps in order to begin construction on the repository, which is estimated to take several months, after which we will begin transporting soil to the repository,” the statement said. ADEQ will be evaluating the new permanent site plan when Freeport submits it, explained Erin Jordan, ADEQ public information officer.

“Meanwhile, soil removed by Freeport from properties in Clarkdale is being stored temporarily at the company’s Mansion property in town,” he said.

Freeport was referring to the historic Clark Mansion, which towered over Peck’s Lake for decades and succumbed to flames in 2010 after it was boarded up.

“The temporary site is not lined,” according to Jordan. “ADEQ does not believe leaching of the metals in soils to Pecks Lake or the Verde River at the site is a concern given the relatively short term (months) the stored soils will be onsite. Freeport has committed to moving these soils to the permanent soil repository upon its construction.”

Mabery said three acres is enough storage room at the temporary site to let them start with work on residential areas. More than 500 property owners have now signed up for soil remediation.

“They are moving forward with yards,” Mabery said. “They started last week in the residential areas.”

“With their remediation teams now fully deployed between Freeport and their contractors, they have 55 full-time employees working five to six days a week in Clarkdale,” Mabery said in a press release.

“Remediation work on private properties within the historic Clarkdale town site began last week, and Freeport estimates that they’ll be working on an average of 5-10 properties per week for the duration of the project” which Mabery estimates to last three years.

Owners of residential, commercial and public properties are still encouraged to sign up, she said,

There are three other parks in Clarkdale that will also be cleaned up in the remediation at a later date, but Mabery said the town is taking advantage of this opportunity to spruce up Main Street Park.

The town has just replaced a deteriorating concrete plaza in front of the gazebo, planted six new Aleppo Pine trees and installed new electrical conduits for events and vendors.

Workers were busy planting the pines and pouring in the playground sand on Friday afternoon.

The sand under the children’s playground was also removed and replaced with new curbs around the equipment, she said.

Mabery said the sod or lawn comes in big rolls and they are hoping to roll it out in early June.

The sod will be rolled out in time for grand re-opening of the Town Park on June 23 with a dedication ceremony. Mabery said they should make it even though they just finished removing the contaminated soil last week.