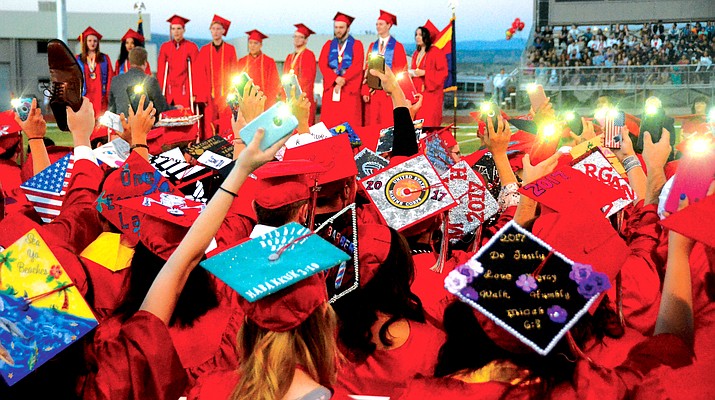 COTTONWOOD – When Mingus Union High School celebrates its graduates this Friday, the cheers won’t be just about the quantity of students, but also for the quality.

Two years ago, the school graduated 319 young people, a total that exceeded its previous best by 11.

This year, 280 Marauders will collect their diplomas – and 49 of them will finish with grade-point averages of at least 3.5.

But Mackenzie King says it could be even better, once she finishes her finals.

“And I have only AP classes this semester,” said King, Mingus Union’s 2018 Valedictorian.

King has been accepted to attend Arizona State University’s Barrett program where she will major in history. Though she has plans to also have a minor at ASU, King is not positive which subject.

Though the valedictorian admits to having “absolutely no idea” where she will be in 10 years, King wants to be “historical consultant, an activist, and/or a professor.”

In scholarships and awards this year, King’s graduating class earned $4,487,346, and also received special recognition for Career and Technical Education completion, Athlete of the Year, graduates with distinction, and Armed Services awards.

Mingus Union recognized the awards at its annual scholarship and academic honors ceremony on May 15.

To Mingus Union’s first-year principal Genie Gee, it was “an excellent night in education.”

With a 4.2 grade-point average as of December 2017, both Saya Federbush and Pei-Wen Yang are Mingus Union-s co-salutatorians for 2018.

Federbush, who has had perfect attendance all four years at Mingus Union, has plans to attend Northwestern University, while Yang will attend the University of California at San Diego.

Graduation begins at 7 p.m. Friday on Bright Field at Mingus Union High School. Graduates are to meet in the school’s gym at 6 p.m. to line up for the ceremony.

Both Mingus parking lots are available, but they are expected to fill up by 6 p.m. Gates open at 5 p.m. Overflow parking is available in the Mingus lot across Camino Real from the east lot, at Fry’s and at the Faith Lutheran Church just east of the school.

Mingus will have three shuttles running in a continuous loop going from both the Fry’s and Faith Lutheran parking lots to and from the school. There will also be golf carts available to shuttle families to their seats.