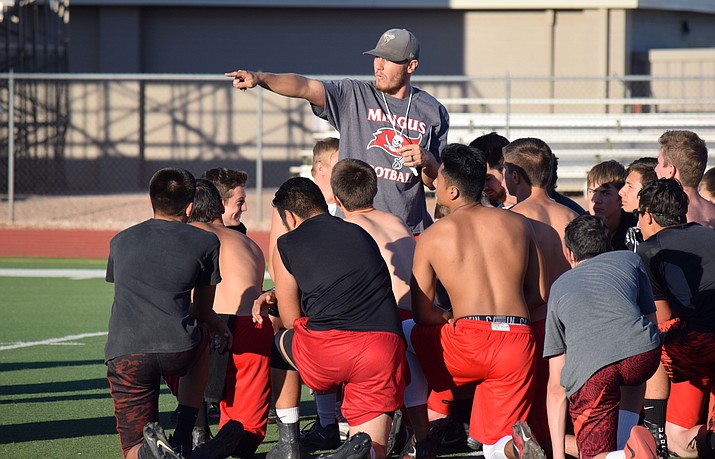 In 2011 when Mingus Union alumnus Robert Ortiz signed with Dakota State football, he told the Verde Independent what his dream job would be.

“Our relationship was one that I’ll always remember,” said the 2009 MUHS graduate. “Everything he ever taught me translates into now, and me living on my own. One of his things was, we don’t have the top athletes in Cottonwood, but if you work hard, we can be one of the top teams in the state. I look back now, and I’ve worked so hard the last two years of my life in Scottsdale, and I see that hard work pays off. I’m proof of it--I just got a full ride to play football at a university.”

Mingus head football coach Robert Ortiz shows the Marauders how to warm up during his first practice in charge on Tuesday. (VVN/James Kelley)

“It’s pretty awesome,” Ortiz said. “I’m super excited. It’s really just a dream come true. I was born and raised here, so I’m coming home, I get to take care of the kids and the guys going through what I went through at their age. It means a lot more coaching here than anywhere else.”

He said it had long been a dream of his to lead the Marauder football program.

“I was pretty dead set at an early age at what I wanted to be and what I wanted to do when I grew up,” Ortiz said. “I wanted to be a PE teacher, a strength and conditioning coach and a football coach and now I get to live out the dream. In that article specifically I said my dream job was to have coach Young’s job, so it’s just a dream come true.”

Ortiz comes back to Cottonwood after having coached wide receivers at Mesa Community College and taught at various Mesa schools, most recently Brinton Elementary School. He graduated from ASU.

“He just had a really good interview, he has college experience and he’s well connected to the community and he just has a really good plan for Mingus,” Mingus athletic director Yancey DeVore said.

During his first practice, Ortiz was going over formations and plays and he asked the players how many of them had played the Madden video games and used an example from there.

Ortiz is the latest new Mingus Union coach that is a young alum.

“I think it might be some coincidence in there because our goal really is to find the best coaches for our kids at Mingus and right now the best coaches are who we’re hiring,” DeVore said. “So it could be a coincidence but we got young, energetic people that want to come in here and affect change and we want what’s really best for Mingus kids and for our community.”

“I think it’s pretty cool,” Ortiz said. “I think what it gives is the kids a visual on something that they can do and be when they leave here. One of my big philosophies is ‘you pursue your dreams and then you give back in some way, shape or form’ and I think when you look at somebody like Ms. Westcott or coach Quesada or myself, we all took different paths and we all pursued what we wanted to pursue and now we’re coming back and giving back to the kids that are growing up and going through the same things that we went through and we’re able to kinda pay it forward and hopefully set that example for them, that that’s something that they can pursue at a later age.”

DeVore said Westcott and Quesada, who just finished their first seasons, did excellent jobs and that the kids respected them.

Be careful what you wish for, you might just get it.

“I think I got the hardest job in the state to fill, man,” Ortiz said. “I got the biggest shoes to fill. He won a ton of games here, made a name for this place, it’s not easy coming in and taking over for a legend — a legend in the state — let alone here in the town, but I hope to just kinda continue and build off of all the traditions and the foundations and everything that he’s done and carried on for years here.”

Quesada, who was in Ortiz’s wedding and will coach wide receivers and defensive backs, said it’s a shame to see Young go but if anyone is up to that task, Ortiz is.

“He has the biggest shoes to fill, you ask any coach in the state about coach Young and they only have the highest praise but if anyone can do it, it’s going to be Robert,” Quesada said.

“Mingus needs to get younger, it will be a good opportunity for some of these young guys to step up and move Mingus on to the next phase,” Young said.

It’ll be a return to the Valley of the Sun for Ortiz, who expects his MCC experience to help a lot.

“I think it will help me a lot because a lot of the coaches I coached with at Mesa Community College were all high school head coaches here in the state of Arizona, so I got to work with a lot of guys who are already went through what I went through now and those are guys that I’m relying on to kinda help me get through this starting process here, so I think that experience helps more than enough,” Ortiz said.

After Tuesday night’s practice Ortiz said he hadn’t gotten to watch any film on his new team yet but the big senior class should help them repeat as region champions.

“I have a pretty good idea of where guys’ll play, I know the senior class is a big class, which is good because they’ve been a part of the traditions and they’ve been through everything the last three years, but I think coming in with a large class helps because they’ll be that first group to set the tone for the new wave but they were a part of the old and the new, so they get to be the foundation setter for the things going forward.”