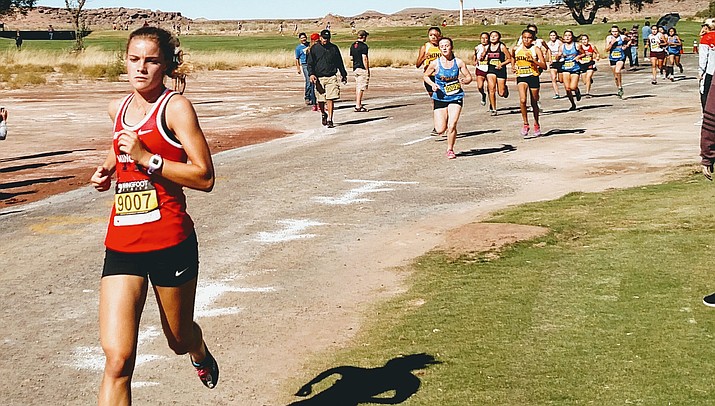 HOLBROOK -- Mingus Union High School’s cross country season came to an end Friday for all but one runner.

Both the boys and girls teams failed to crack the top eight team slots to earn the right to run in the Nov. 10 state championship race at Cave Creek.

Individually, Marauder senior Meg Babcock punched her ticket for the state meet by finishing among the top 25 individuals.

The Mingus girls finished 10th among the 16 teams in Friday’s Division III, Section IV Northern League Championships. The Chinle girls, paced by individual winner Alisia Honyumptewa (18:49 for 5-kilometers), won the team title with a low score of 133. Mingus was 10th overall with 280 points. As a team, Mingus’ top five runners averaged 23:49 over the 5K distance with 4-minutes, 11 seconds between the Marauders’ 1 and 5 runners.

While the Mingus girls failed to qualify for state as a team, Babcock, a senior, did qualify individually. Babcock went out aggressively and was in fifth place after the first mile. By mile 2, she had fallen back to 21st place and during the final mile dropped one more position briefly before finally finishing in 21st place with a 21:47 clocking. This will be her second trip to the state championship race, having been a member of the 2015 team that qualified during her freshmen season.

The Mingus boys finished 11th among 16 teams in Friday’s league championships. Sophomore Jehiah Rogers paced the Mingus effort with an 18:22 clocking over 5 kilometers for 34th place among 112 runners.

Page won the team title with a dominant low score of 17 points as the Sand Devils swept the top three places as well as the fifth and sixth spots. Page senior Bowen Martin was the overall winner in 16:12.

The Mingus boys averaged 19:02 per man for the Marauders’ five scoring runners with a respectable gap of 1-minute, 8-seconds between 1 and 5. While the Mingus boys were three team places away from qualifying for state, the time difference between the Marauders and No. 8 seed Coconino was just 18 seconds per man, or 6-seconds per mile per man.