Secondary tax rates for a consolidated school district can change, according to Tim Carter's office 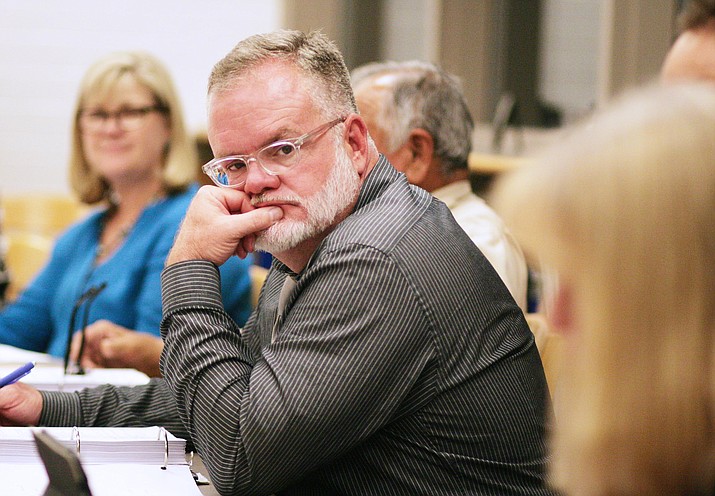 When it comes to secondary tax rates for a consolidated school district, the keyword is estimate.

“Correct in that Mingus will see a reduction of nearly $868k in secondary taxes from the loss of bond and override dollars once Clarkdale and Jerome are removed from the new consolidated district boundaries. However, Mingus will not truly see any reduction in their budget.”

“Reflecting back on my experiences when Sedona broke off into its own district, the shortfall for a Mingus separation in funding caught me by surprise. What we did then was divide assets and debt. Sedona couldn’t escape its vote on incurred debt but received assets in order to square the books. I can imagine that made the bonding company happy to know that the obligation the voters passed was going to be honored.”

“Should the consolidation be successful as is, and the Clarkdale-Jerome District not be included, those students would be tuitioned into the consolidated district, and their tuition payments would include a capital portion relevant to the cost of capital operation of the high school they would attend.”

“The numbers can and will change in the future,” said Renee Raskin of Yavapai County School Superintendent Tim Carter’s office. “The numbers will be estimates until the tax rates are actually set at that time.”

Based on Raskin’s report, Mingus would stand to lose $867,584 in bond and override monies – a figure that represents the estimated secondary tax rates excluding Clarkdale, limited access value, for fiscal year 2020.

But that figure, again, is subject to change.

“Keep in mind that if there is a consolidation election in 2019, the current secondary tax rate estimates will be changing,” said Raskin, chief deputy of the Yavapai County Education Services Agency.

Which is why Cottonwood-Oak Creek School Board member Jason Finger said this week that voters “should have the right to have their say and vote on consolidation.”

Finger admitted that if voters supported a merger of Cottonwood-Oak Creek and Mingus Union, that Mingus Union “will see a reduction” in secondary taxes from the loss of bond and override dollars “once Clarkdale and Jerome are removed from the new consolidated district boundaries.”

The way Jason Finger understands it, the Mingus Union High School District would not “truly see any reduction in their budget.”

The estimated difference is “cash balance and not part of their budget capacity,” Finger said. “It is money that would be still going to the new consolidated district by an adjustment of the new district consisting of Cornville and Cottonwood residents.”

“When you have taxes, and a significant tax increase, the notion that future bonds or future overrides would pass diminishes,” Ledbetter said. “If property taxes increase in the future, it’s still a percentage of the property taxes, so the taxes would increase as well. The truth is, no thinking individual would shrink the size of the district and have a smaller number of taxpayers bear a higher tax burden.”

According to Phil Terbell, suggesting that Raskin’s estimates claim “a major loss of revenue to the consolidated school district is not an accurate portrayal of that report.”

“It appears to promote the fact that Clarkdale-Jerome taxpayers should pay a portion of both the Mingus Union High School and the Cottonwood-Oak Creek overrides and bonded indebtedness, to maintain the current cash flow,” said Terbell, a member of the political action group known as Committee for Better Upper Verde Schools. “That is not my understanding of the situation.”

“The information provided to the public, referencing and summarized, conclusions about the report I believe are erroneous,” Terbell said. “I don’t believe that there would be any future reduction in classes, nor reduction in teacher staff, from a reduction in secondary property tax levies.”

Editorial: Financial outcomes of consolidation an exercise in speculation
What it costs you to operate a school
Commentary: Voter-approved school funding will not vanish with consolidation
Mingus says secondary tax rates for consolidated district create $867,584 shortfall
Editorial Don’t be confused on override vote; your tax bill is not at threat