Changing of the guard: New faces sworn into Cottonwood City Council (with video) 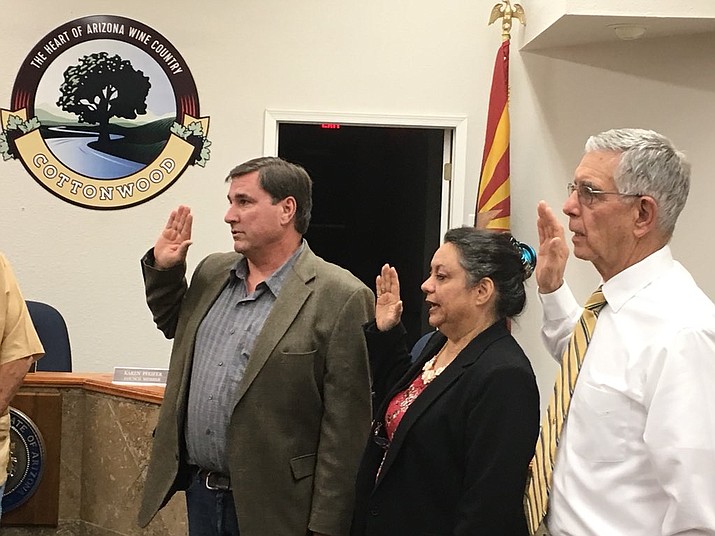 COTTONWOOD -- Cottonwood City Council had a changing of the guard Wednesday.

Pfeifer is a 46-year resident of the Verde Valley and has served on city council since 1991 with a brief interruption in 1997.

She called her time on council a "wild ride."

"For the most part we were very civil," she said. "Some of the politics in the country filtered down in the last couple of elections but we've got wonderful people here. (Mayor Tim Elinski) stepped up when he was younger, we need young blood in the city."

Norman was first elected to Cottonwood City Council in 2005 and reelected again in 2009. Norman was also appointed to fill an empty council seat in 2016.

"It's been a great ride," she said. "I've enjoyed every minute of it, I've met a lot of people, I've learned a lot of new things and I understand better how city government works."

Members were sworn in by Cottonwood City Attorney Steve Horton.

Allen was seeking election to the seat she was appointed to in June 2016. She was selected by her council peers to serve as vice mayor in January.

In her campaign, she outlined keeping the Recreation Center in city control, fiscal responsibility and transparency as part of her platform. Allen is a 32-year resident of Cottonwood and graduate of the Verde Valley Leadership Program.

Mathews is a local real-estate broker and member of the Historic Preservation Commission. He spent four years in the United States Airforce as an aircraft maintenance specialist.

Hulse, a member of the Parks and Recreation Commission and 20-year resident of the Verde Valley, was a catalyst in bringing the voter-approved Recreation Center to the City of Cottonwood.