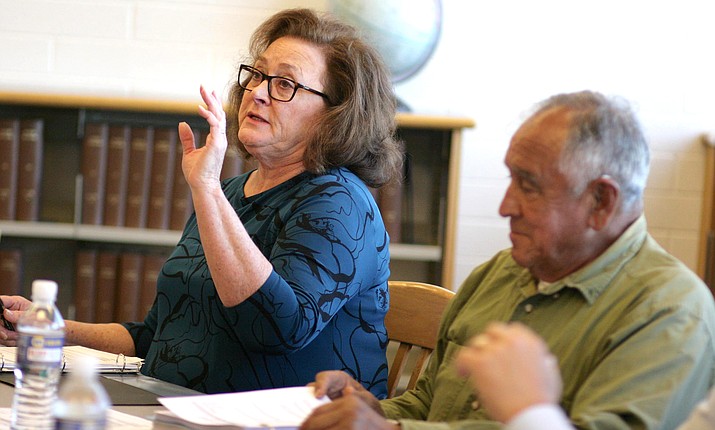 Hargrove’s paid leave was extended because of what attorney Susan Segal called “many other issues [that] came up” in a two-week investigation by Gust Rosenfeld, the district’s legal counsel.

On Oct. 25, the Mingus Union School Board unanimously voted to place Hargrove on 10-day paid administrative leave for what Jim Ledbetter said at the time were “serious missteps in handling of the processes” connected to AzMERIT testing problems in April.

Exploration of the other unnamed issues that led to Thursday’s decision “needs to take its natural course,” said Mingus Union School Board member Steve Gesell.

“With all due respect to Dr. Hargrove’s privacy, I’m optimistic that we’ll make some progress on Saturday,” Gesell said. “The [additional] leave allows us to have that due diligence.”

Segal, who was in executive session with the Mingus Union School Board for legal advice, said following the board’s decision that she would not release the investigative report because the document was “attorney-client privileged.”

The report, she also said, “may not be a report that is released.”

“It may depend on how the negotiations unfold,” she said.

When asked if “negotiations” meant that Hargrove would be dismissed by Mingus Union, Segal said that there are a “number of options related to the negotiations.”

“It could be a number of things,” Segal said. “This doesn’t imply that she’ll be terminated. I would not assume anything.”

Hargrove was not present at Thursday’s meeting. Segal said that she is talking with the superintendent “through her attorney.”

“We’re working expeditiously to bring this to a fair resolution,” Segal said. “We’re looking for an outcome that is in the best interests of everyone.”

The Mingus board signed Hargrove to a three-year contract extension in April at a base salary of $116,280 per year.

The board called for a 9 a.m. Saturday executive session – and also asked Principal Genie Gee to serve as acting superintendent.

“This does not mean that Ms. Gee is replacing Dr. Hargrove permanently,” Segal said.

A copy of the agenda can be found at https://v3.boardbook.org/Public/PublicHome.aspx?ak=1000989.