Hargrove out as Mingus Union superintendent (with video) 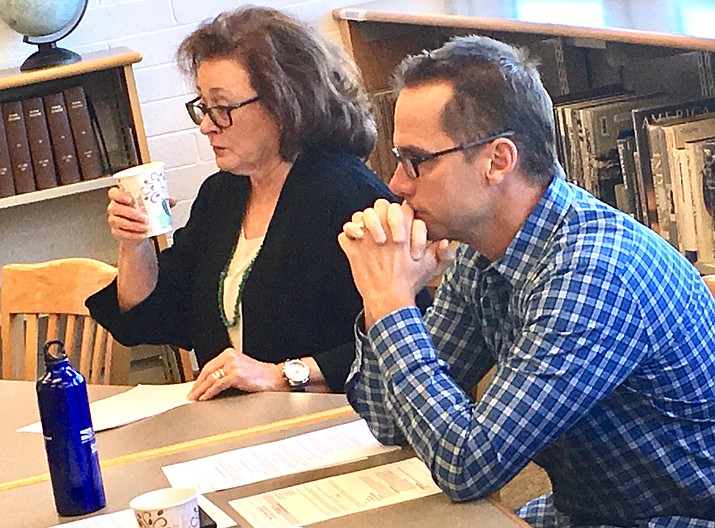 Mingus Union School Board President Anita Glazar (left) and Board Member Steve Gesell during the board’s Saturday meeting to accept the resignation of Penny Hargrove as district superintendent. VVN/Vyto Starinskas

The board both accepted Hargrove’s resignation and a settlement agreement with the now former district superintendent.

Hargrove’s resignation was approved by a unanimous vote of the five-member school board. The settlement agreement was approved in a 4-0 vote, with Board Member Anthony Lozano abstaining.

Hargrove did not attend Saturday's meeting.

Hargrove’s long-term employment with the district had been suspect since Oct. 25, when the board placed her on a 10-day administrative leave in the aftermath of the high school receiving a “D” in the annual Arizona Department of Education’s school report cards. Further, board members were exasperated over what veteran Board Member Jim Ledbetter characterized as “serious missteps” in the way Hargrove handled a technological breakdown during the school’s AzMERIT testing last spring.

Saturday, her employment with Mingus ended with a resignation letter that stated, “I hereby tender my resignation as superintendent, on the condition that I be provided with a separation agreement that incorporates the terms and provisions of the offer that was made to me in an email from the Board’s counsel, Susan Segal, sent to my counsel on Nov. 8, 2018.”

While the Mingus Board signed Hargrove to a three-year contract extension in April at a base salary of $116,280 per year, the settlement agreement approved Saturday only calls for Mingus to pay Hargrove through Feb. 28, 2019.

• “The district will pay Employee a sum equal to her regular monthly compensation (base pay plus stipend) under her Superintendent’s Contract of Employment for the period commencing November 12, 2018, through February 29, 2019.”

• “The District will pay Employee a sum equal to the cost of Employee’s COBRA continuation coverage for her dental and health insurance at the level she currently receives under her Superintendent’s Contract of Employment, commencing Nov. 12, 2018, through February 28, 2019, provided Employee makes timely application for the coverage.”

• “Employee will be paid any remaining balance of accrued but unused vacation leave pursuant to District policy.”

Earlier this week, the board named Principal Genie Gee to serve as acting superintendent.