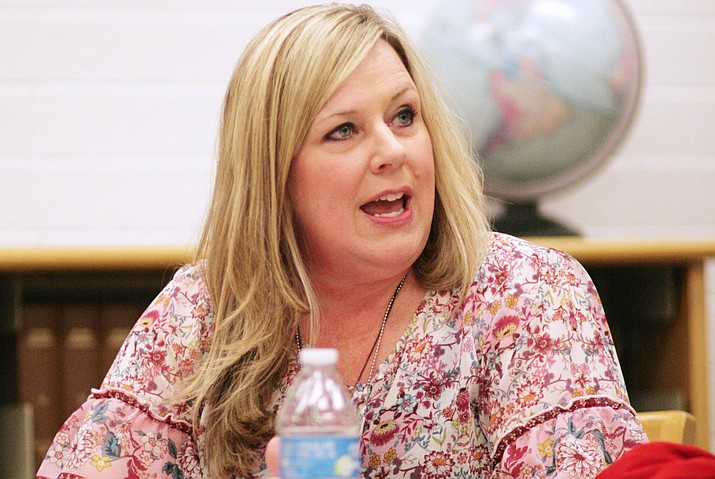 Mingus Union Principal Genie Gee said that “effective communication with the Mingus team and the board members, and maintaining community partnerships” are her immediate priorities as the district’s acting superintendent. VVN/Bill Helm

COTTONWOOD – There’s no telling how long Genie Gee will be in the front seat at Mingus Union High School District.

Hargrove resigned Saturday while on indefinite suspension over what Board Member Jim Ledbetter called “serious missteps” in the way Hargrove handled a technological breakdown during the school’s AzMERIT testing last spring.

According to Board Member Lori Drake, Hargrove resigned “amid serious allegations, with some requiring reporting to Office of Attorney General.

“This is sad and upsetting, as during the investigation by our district’s attorney, Mrs. Susan Segal and her legal team of Gust Rosenfeld, uncovered other issues as well,” Drake said.

Gee, who was named acting superintendent on Nov. 8, said “effective communication with the Mingus team and the board members, and maintaining community partnerships” are her immediate priorities.

Saturday, the Mingus Union School Board made no mention of the process to replace Hargrove in the long-term.

As a single-school district, Mingus Union offers a “unique aspect [that] impacts recruitment and retention for [a] superintendent, as it understandably reduces the number of professionals who will fit and thrive here,” Board Member Steve Gesell said.

With 12 superintendents in the past 18 years, Gesell said that “unique circumstances call for unique solutions” when it comes to finding Hargrove’s replacement.

Gesell, Ledbetter and Board President Anita Glazar did not run for reelection and will give up their seats on Dec. 31.

“I would encourage the [new] board to get creative in identifying the objective and process when deciding how to move forward in permanently filling the superintendent position,” Gesell said. “We’re a single school district that needs invested and effective leadership.”

Lori Drake and Anthony Lozano are the two Mingus Union board members whose terms expire in 2020.

Drake said the board “will move forward when it is in the absolute best interest of students, staff, and community members within this district.”

But the Mingus Union School Board will not treat the district’s lack of a superintendent – in and of itself – as a reason to merge with the Cottonwood-Oak Creek School District.

“Our stance has not changed. Consolidation is not good for Mingus Union High School and its students,” Drake said.

The next meeting of the Mingus Union High School Board is Thursday, Nov. 29.