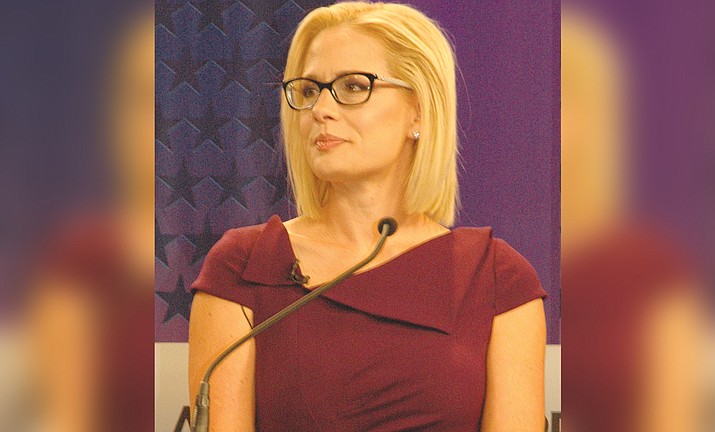 PHOENIX -- The latest batch of votes counted Monday put the U.S. Senate out of the reach of Republican Martha McSally and into the hands of an Arizona Democrat for the first time since 1994.

Sinema got another big boost from Pima County, where she is continuing to pick up four votes for every three for McSally.

And her vote edge in what is supposed to be Republican Maricopa County also stretched to 45,000 out of nearly 1.3 million votes tallied so far. That includes nearly 29,000 for Green Party contender Angela Green who dropped out several days before Election Day.

All this is significant because there are now only about 175,000 votes left to be counted.

Most of those -- about 143,000 -- are in Maricopa County where the numbers from the early ballots that are still being counted have so far broken Sinema’s way.

In fact, to make up Sinema’s lead McSally would have had to to pick up close three of each of the Maricopa County votes that remain to be counted for every two that are cast for the Democrat.

McSally, in a video released online, congratulated Sinema on her victory -- and the fact that Sinema will be the first woman Arizona has sent to the U.S. Senate.

“I wish her all success as she represents Arizona in the Senate,’’ McSally said.

The outcome of the race also means that this will be the first time in five decades that Arizona has sent more Democrats to Washington than Republicans. The last time was in 1967 when Democrat Carl Hayden was one of the state’s two senators and two of the three House seats Arizona had at the time were held by Democrats.

With Ann Kirkpatrick taking the congressional seat that McSally gave up to run for Senate, Arizona will have five Democrats in the U.S. House versus four Republicans. And even with Jon Kyl remaining in the Senate -- or whoever Gov. Doug Ducey will appoint should Kyl quit in January -- having Sinema as the other senator means a 6-5 delegation.

Sinema, in her speech Monday night to supporters, thanked McSally. But she also took a slap of sorts at the campaign McSally and her allies waged against her.

“Arizonans had a choice between two very different ways forward, one focused on fear and party politics, and one focused on Arizona and the issues that matter to everyday families,’’ she said.

“Arizona rejected what has become far too common in our country: name calling, petty personal attacks, doing and saying whatever it takes just to get elected,’’ Sinema continued. “It’s dangerous and it lessens who we are as a country.’’

Much of the campaign waged by McSally and her allies was focused on who Sinema, now 42, was years ago when she was known for her protests against the war in Iraq. Those moves came back to haunt her in this year’s race, with videos of her in a tutu and linking her to a pamphlet that suggested U.S. soldiers were committing war crimes against civilians.

There even were charges by McSally during the sole debate between the pair that comments Sinema made in a radio interview amounted to “treason.’’

Sinema’s first major campaign was an unsuccessful bid for the Legislature in 2002 under the Green Party banner. She came in fifth in the five-way race.

Two years later she got elected as a Democrat from the central Phoenix legislative district, often championing liberal causes.

But there was a slow but deliberate shift to the center as Sinema eyed the congressional seat created after the 2010 census, managing to win in 2012 in a tossup district.

Sinema, in a nod to Republicans and independents whose votes she needed to win, gave a nod to the late John McCain, saying she models herself after his indepenence.

McSally’s loss may not mean the end of her political career.

The first female Air Force pilot in combat, she lost her first political outing in 2012 when she attempted to defeat Democrat Ron Barber.

He had been appointed to the congressional seat that had been occupied by fellow Democrat Gabrielle Giffords who eventually had to resign after being shot.

But McSally came back two years later to take the seat from Barber.

There may be a U.S. Senate seat open sooner than anyone expects.

After the death of McCain, Gov. Doug Ducey appointed former Sen. Jon Kyl to the post where he can serve until the 2020 election. But Kyl has hinted he might quit before then, giving Ducey a chance to appoint another replacement who, like McCain and Kyl, must be a Republican.