Community members and stakeholders from all over the Verde Valley had the chance to meet the finalists Friday morning at the Cottonwood Recreation Center.

Lyman Howard, former city manager of Sammamish, Washington dropped out of the running after accepting another job, according to Jenn Reichelt of Novak Consulting Group, the recruiting firm helping the city in the selection process.

Bessler said the friendly atmosphere is what drew him to Cottonwood.

"In a metro area, you're either in a rush or waiting," he said.

He said when he visited Cottonwood, everyone greeted him with a smile.

"You can't put a price on that," he said. "There's nothing more contagious than a smile."

Bessler said he likes bringing people together to find common ground which is what he would try to do as city manager.

Bessler was recently ousted from his job in Tempe following complaints of workplace behavior, according to reporting by The Arizona Republic and Phoenix New Times.

In an interview, Bessler said he has held four jobs in local government and never once had a performance issue.

He also said he initially approached the City of Tempe to leave his position.

"Unfortunately when I initiated, it was contentious," he said. "It's unfortunate it ended that way."

Rodriguez has been working for the City of Cottonwood for almost two decades.

A Texas native, Rodriguez said he has been trying to lose his accent ever since moving to Arizona.

Rodriguez said he hopes to be in a role where he can help Cottonwood grow.

One way, he said, is to increase the population and also use the recent sales tax increase to replenish the city's reserves as well as market what Cottonwood has to offer.

"We don't have what Sedona has -- the red rocks," he said. "But people from Sedona come here to get away with all that. One thing we don't want is to be like Sedona ... but we've got plenty to offer."

Corbin said a big draw Cottonwood has for him is "the smell."

He said he was walking down Old Town and caught a whiff of wood burning stoves and it reminded him of his home in Arkansas.

"I left Arkansas in '87," he said. "It triggered a pleasant memory.

For Corbin, city manager is a buffer between staff and council. He said a large part of that is building trust and respect, even when council and staff don't always agree.

"It's about making sure staff is prepared," he said.

Joseph said the City of Cottonwood reminds him of Montrose, Colorado where he previously served as assistant city manager. Joseph originally joined the City of Montrose as an intern. 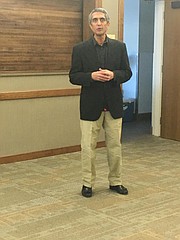 With a background in academia, marketing and business, Joseph doesn't characterize himself as a "traditional city manager."

"I'm a businessman," he said. "Marketing by trade."

Joseph said he's also had experience as an elected official and knows what it's like on both sides of the dais.

"City manager in my view does not dictate policy," he said. "I simply carry out what council desires."