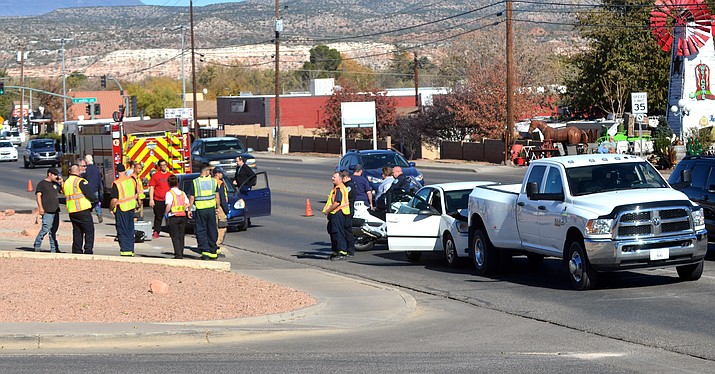 Cottonwood police say a “road rage” incident prompted this two-car crash Monday morning near the intersection of South Main Street and East Ash Street. One the drivers was charged with reckless driving, disorderly conduct and no proof of insurance, all misdemeanors. VVN/Vyto Starinskas

A 52-year-old Cottonwood man was yelling at the driver of a small sedan before he pulled in front of him in his pickup truck, slammed on the brakes, caused an accident, and got out in a “fighting posture,” according to Cottonwood Police Sgt. Monica Kuhlt Monday.

The Ram pickup was coming out of Circle K and the sedan was exiting the Goodwill Store on Mingus Avenue Monday morning when “they basically crossed each other’s paths,” Kuhlt said.

There was no collision at that point and the vehicles went their separate ways, she said.

The pickup truck driver, who was headed west on Mingus Avenue, “decides to flip a U-turn and come after the white car to confront him about it,” Kuhlt continued.

Both vehicles then turned on Main Street and “the guy in the pickup truck is yelling, based on witnesses, at the driver of the white car,” she said.

The truck was in the outside lane on South Main Street and then pulled in front of the car and “stomps on his brakes,” the police officer said.

There were witnesses in a car right behind the accident with an in-car camera that captured the entire series of events, Kuhlt said. A camera at one nearby businesses also recorded this “road rage” incident, she added.

The event occurred just before lunchtime on Monday in front of Dairy Queen in the intersection of South Main Street and East Ash Street.

The driver of the truck was transported with injuries to the hospital and also cited by Cottonwood police and released for reckless driving, disorderly conduct and no proof of insurance, Kuhlt said, all misdemeanors.

The driver of the pickup was the “at-fault driver” because it was a road rage incident and he caused the collision, Kuhlt said.

“I call it a road rage because the collision happened because of an altercation,” Kuhlt explained.

They had a disagreement of some sort on the roadway and both were going their separate ways, and the truck “re-engaged,” she said.

Neither driver had proof of insurance, she said.

There appeared to be much more damage to the sedan than to the truck, Kuhlt said.