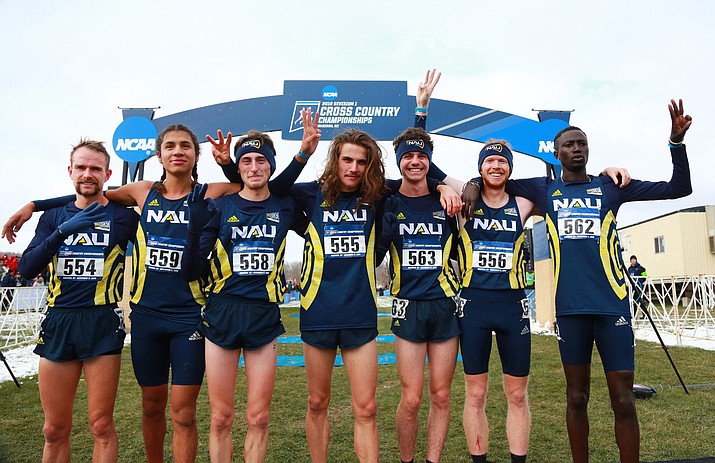 The Lumberjacks raced past second place BYU, 83-116 to win the team title in the snow at the NCAA National Championships at the Thomas Zimmer Championship Cross Country Course in Madison, Wisc.

Also NAU is the first non-power five school since UTEP in 1978 to 1981 to win three straight titles.

“Every inch of this championship win was earned by these young men,” said Director of Cross Country and Track & Field Michael Smith in a press release. “I am proud to be by their side in this moment. We do not often speak of the pressure of expectation, but the truth is the higher the bar the finer our margin of error. This was the most challenging championship to secure and required selfless execution. They knew what to do.”

The 2016 championship was their first national title in any sport.

“Being a coach of a championship team is a byproduct of being a coach of young men filled with talent, grit and heart,” said assistant coach Becca DeLoache in a press release. “These men have established a culture that is practiced and displayed every single day. I feel honored that I get to witness the way these guys do things and I am blessed to be a part of their journey.”

Temperatures got as low as 28 degrees.

Wisconsin’s Morgan McDonald won the individual championship with a time of 29:08.3.

Senior Tyler Day led the way for Lumberjacks, taking sixth-place with a time of 29:12.9.

“I am proud of my performance,” Day said in a press release. “I gave it my all and I cannot think of a better way to end the season. The group of guys we have within this program are some of the best runners I know so I am pumped to see what they can achieve in the future.”

“With these conditions it is very important to not lose position,” Lomong said in a press release. “Weather made it difficult tom pass people. The best thing that helped me through it was Blaise and Luis in front of me. I needed to sustain the distance and fight for as long as I could. The struggle started after the first mile and you could see how much everybody was fighting out there. We used each other to win this championship. I am proud of these boys.”