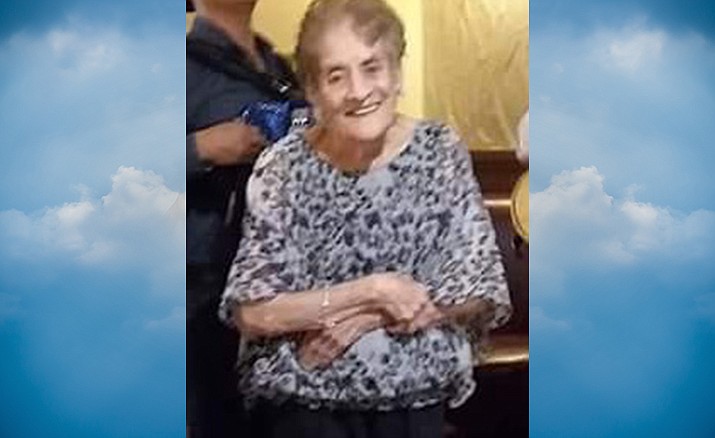 Adelina Regina Razo-Gomez was born on Wednesday, Sept. 22, 1926, in Humboldt, Arizona, the sixth and youngest child to Jose and Vicenta Negrete.

Adelina, aka Lina, was raised in Clemenceau, Arizona. During Lina’s teenage years, she worked at the Piggly Wiggly on Main Street in Cottonwood.

At the age of 16, in 1942, Lina met Serafin Lopez Razo. Their first date took place at the Clarkdale movie theater. Adelina and Serafin began a family in 1943 with the birth of their first son Nicanor. Sadly Nicanor passed away shortly after. In 1945, Serafin and Lina’s baby boom began with the subsequent births of five daughters and two sons. The Razo family lived humbly in a two-bedroom home on 9th Street (renamed now as 8th Street).


Lina was a masterful cook and creative homemaker on the meager wages earned by Serafin at the Verde Valley lumber company. She provided a home rich in love and laughter where the foundation was love of Christ, La Virgen de Guadalupe, and family.

Lina worked for LULAC during the late 70s in Clifton, Arizona, where she prepared meals for the elderly.

In 1995, Lina returned to her hometown of Cottonwood where she looked forward to spending time with her children, 21 grandchildren, 39 great-grandchildren, and four great-great-grandchildren … to date. She crocheted blankets for the arrival of all her grandchildren as long as her hands permitted. Furthermore, she was a masterful gardener whose homes were always adorned by rose bushes. Lina’s home was filled with the sounds of her birds, the pitter patter of paws from her fur baby, and the scent of delicious Mexican food. Lina’s legendary birthday celebrations were always a beautiful gathering of family, food, rose-filled decor, and sounds of mariachis.

She leaves behind a family of many who loved her immensely and we look forward to seeing her again.

Lina is preceded in death by her siblings, Enedina, Louie, Floyd, Candelaria, Victoria; and her husbands, Serafin Razo and David Gomez.