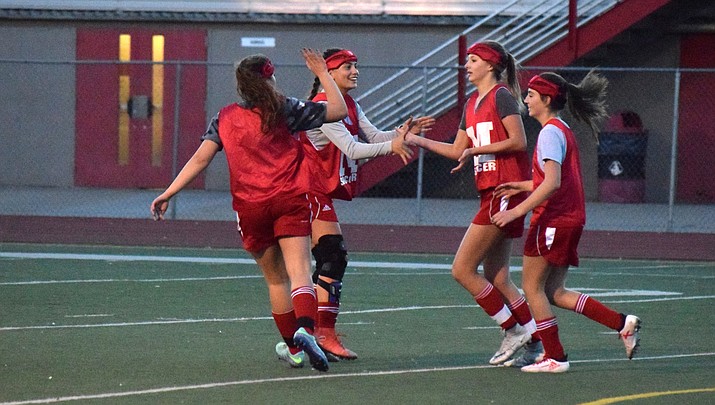 Mingus Marauders celebrate a goal during their scrimmage against AZ College Prep on Monday at home. VVN/James Kelley

A new but familiar head coach took over Mingus Union girls soccer as the Marauders look to return to the playoffs.

Mingus Union will open the season with 12 players on varsity, including two seniors, seven juniors and three sophomores.

Calvin Behlow takes over as the Marauders’ new head coach.

“We’re young,” Calvin Behlow said. “The hardest part I think is we’ve got a bunch of girls that love soccer but have not played as this core yet together. I’ve got a handful of sophomores, a handful of juniors and a handful of seniors. So we’re really mixed I think depending on what other teams throw at us, we’ve had some good dynamics, I think we can play really well.

Calvin Behlow said they have had to adjust but thinks they can do well once the season start. They open the season on Dec. 4 when they host Buckeye Union at 5 p.m.

“The adjustment of going to a pass, pass, pass game has really been hard for some of the girls and some of them in the past have been so prone to use their athletic ability and not their soccer skill that when it comes down to soccer skill, they’re finding that there’s some holes but I think we can fix that,” Calvin Behlow said. “I mean I think the girls are buying in I think we’re doing a pretty good job of trying to adjust how everything looks.”

Calvin Behlow became the Marauders’ third head coach in as many seasons after Joe Rongo was unable to return. Calvin Behlow led the boys team last season and though he had wanted to assist both the boys and girls, he was pressed into service on the girls’ side.

“So I resigned from the boys position hoping to just kinda help both boys and girls and the girls coach ended up having to leave town for a bit and just wasn’t going to be able to make it back, had a great opportunity to kinda travel, and so the position came open,” Calvin Behlow said. “I didn’t want it at first (laughs) I sat there for six weeks and nobody else applied, so the AD came to me and said ‘hey, you sure you don’t want it?’ and I said ‘well if you can’t find anybody,’ so here I am.”

However, he said it’s not just the juniors that are talented.

“I think we’re strong in all three classes I had 19 freshmen show up for tryouts,” Calvin Behlow said. “Obviously I couldn’t keep them all but I had 19 freshmen show up so in my opinion right down the line there’s six or seven good players in every single one of the classes. So I think Marauder soccer looks great for the future. There’s some solid players up and down.”

After the Grand Canyon had a state finalist in Flagstaff, another semifinalist in Prescott and third playoff team in Mohave last year, Calvin Behlow said the region is stacked again.