Mingus board could waive attorney-client privilege over Hargrove report 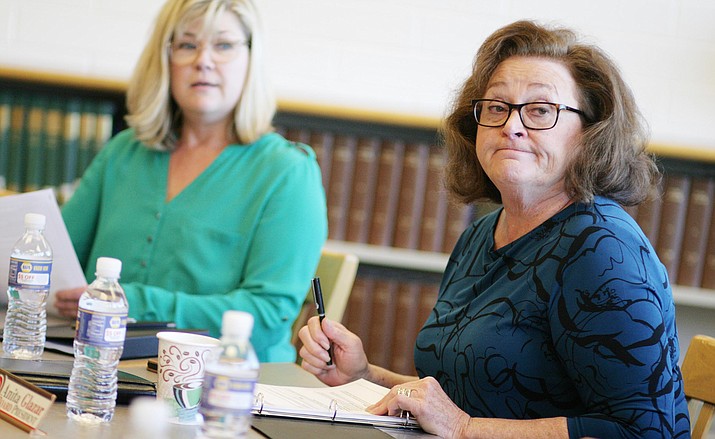 According to a draft copy of Thursday’s agenda, the Mingus board could waive the privilege as it considers three points:

• Information provided to the Arizona Department of Education.

• Conflict of interest of Hargrove.

Hargrove resigned while on indefinite suspension over what Board Member Jim Ledbetter called “serious missteps” in the way she handled a technological breakdown during the school’s AzMERIT testing last spring.

The agenda also states that the Mingus Union School Board “may discuss and take possible action on recommendations” made in the report as the board considers the three above-mentioned points.

According to Daniel Dubien, executive assistant to the district’s governing board, Susan Segal, attorney with Gust Rosenfeld PLC will attend Thursday’s meeting.

Other items on the draft copy of Thursday’s agenda include:

• Possible action on the next steps in the filling the district’s superintendent position. On Nov. 8, Genie Gee was named acting superintendent. Gee is the school’s principal.

• Possible action on a contract with an outside consultant to provide consulting/coaching services to support a new, acting or interim superintendent in a transition of leadership in an amount not to exceed $10,000.

• Possible action on the district administration’s recommendation to increase the sign-on bonus for new bus drivers from $300 to $500 and a re-evaluation of “wage competitiveness” based on years of experience.

Discussion-only items on the draft agenda include:

• Beginning with the 2019-2020 school year, extending benefits to employees who work at least 20 hours each week.

• As of Dec. 31, the Clarkdale-Jerome School District will terminate its part of a groundskeeper shared services agreement. In a Nov. 19 letter, Clarkdale-Jerome Business Manager Kristy Aston said that the district would combine its in-house grounds position with its maintenance position for a full-time position.

“We truly appreciate the support you have shown our district,” Aston wrote in the letter to Mingus Union Business Manager Lynn Leonard. “Thank you for the services you have provided.”

The district will post a copy of the agenda no less than 24 hours before the meeting.