Beer School is a R.I.O.T. in Old Town Cottonwood 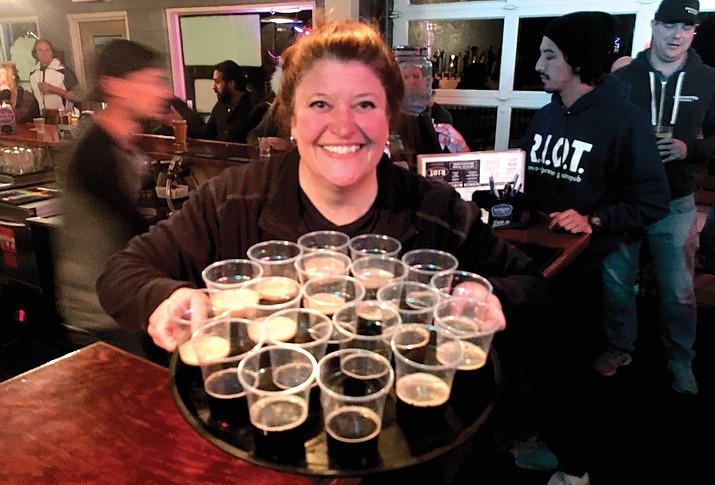 Jet Foley brings out a tray of Deschutes Brewery beer for a tasting during beer school on Tuesday at the Riot. VVN/Vyto Starinskas

How can a person not get an A in this class?

Do you actually get to drink beer during school?

Is it OK to cheer and applaud the teacher?

These are all questions that can be answered at Jet Foley’s increasingly popular Beer School at the RIOT Gastro Pub in Old Town Cottonwood,

Tuesday was no different as 58 students gathered at RIOT to hear teacher Matt Roedig from Deschutes Brewery talk about the five beers he brought from the brewery’s portfolio of 30 beers.

The crowd laughed in unison. They also drank in unison. It’s a class requirement. How else are you supposed to learn about the unique taste of Gin Barrel Aged Hop Hange.

Roalig, a representative from Phoenix for the Bend, Oregon, Deschutes Brewery, said beer schools are unusual. Many bars do “tap takeovers” with swag promotions instead, he said.

Beer school is not about promotion of product, but, rather, good old-fashioned American education.

Students can also drink up to benevolence, as Foley said all the money she raises goes to a charity or a local good cause. Students pay $5 and get plastic cups with 2 ounces of each beer, Foley said.

Right now, Foley is trying to send two eighth-grade girls from Cottonwood Community School to an overnight trip on a Washington D.C. school trip. The children could not go without the fundraising, Foley said. “She didn’t ask for help,” Foley said referring to the mother, but she is a “hard worker and a single-mom.”

“When we first started beer school, we would get like 10 people,” Foley said. “Last night we got 58 and that’s pretty standard.”

Foley said more than 90 students showed up when the Stone Brewing Co. instuctors came to Old Town. They’ll be back for another school at RIOT in December.

“We tout it from an education to a tasting,” she continued. “The beer representatives are real good about talking about their breweries, their brewing process and ingredients. Sometimes we do smaller breweries where we have the actual brewers in the house.”

Foley said she will alternate and bring in a representative from an Arizona brewery one week and an out-of-state brewery next. The SunUp Brewing Co. from Phoenix also visited RIOT this month.

Foley said she had to increase to two beer schools a month because they became so popular.

“The people who come love crafts beers,” Foley said. “So they have great knowledge to begin with.”

Roedig of Deschutes Brewery said he usually holds classes for the staff and owners of restaurants and not patrons. But he finds educating customers at beer schools more fun than tap taker-overs or traditional beer promotions. This way you get the full group’s attention

Roedig would not say if Verde Valley beer drinkers are more educated about beer than others he meets, but he said this was his second beer education class in Cottonwood and always has fun doing schools in the Verde Valley.

The students cheered and clapped as Roedig finished teaching about the fifth beer he brought. The enthusiasm seemed to grow during the class as each two-ounce beer was consumed.

Most of the time, the breweries pass out glassware in forms of pint glasses, stickers and other branded beer “swag,” Foley said.

“I see this as the community getting together and paying for something that supports something real valuable,” said Foley as she explained two beers schools allowed her to make a $600 partial payment on the school trip for the girls.

“It’s (the beer school) super festive,” Foley said with a smile. “People love it and take it very seriously.”

“You will meet people. You will all become friends. You have this common interest.”