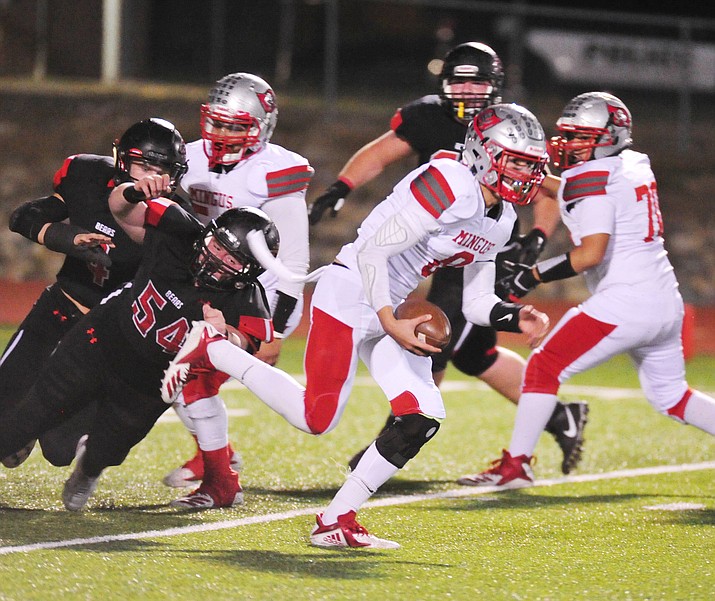 “I thought he had a great year,” Mingus head coach Robert Ortiz said “He’s the best passer Mingus has ever had thus far, he broke all the school’s passing records. To accomplish that with him and I only working together since the beginning part of June is a testament to his work ethic and who he really is as a quarterback in the game of football.”

In his first year, Ortiz won Region Coach of the Year. Earlier in the season he won Arizona Cardinals and Wells Fargo “High School Coach-of-the-Week.”

He said it is a huge honor and privilege.

“Honestly I feel like it’s pretty cool to be voted by your peers and what not, to come in and as a first year guy and do that,” Ortiz said. “One of the things that I talked about is I would have voted for coach (Mike) Moran up at Coco because

for them to do what they did and him as a coach to turn that place around in year one, we’re talking about a complete turn around Mingus got a new football coach, that guy turned his whole program around, so I feel like there are other guys that are deserving of it. But I think one of the things they always do is they make sure to recognize the region winner.”

After a couple short-handed losses in the September, the Marauders won six games in a row, including three in a row on the road.

Taylor and Streck are the only players to make the first team for offense and defense. A couple Bradshaw Mountain players made the first team twice but their second position was long snapper or punter.

“I feel like our entire team had a great year but those two, what Kendrew did defensively and what Chaz did receiver wise hasn’t been done here in the past and I think that’s a testament to who they are as student athletes,” Ortiz said.

Competition for three player of the year spots was tough. The Grand Canyon had four teams finish in the top four at state.

“It’s tough conversations when we do,” Ortiz said. “The toughest part about it is that you can’t vote for your own kid so that always makes it hard. In everyone’s eyes here in the community and when you look around and when you watch film, Kendrew Streck should have been defensive player of the year, you can’t vote for your own kid, thus one vote goes the other way and that’s kinda how it swings.”

Marauders that he thought deserved to recognition was the whole offensive line but that was a tough position to get because the region had six 1,000-plus yard rushers.