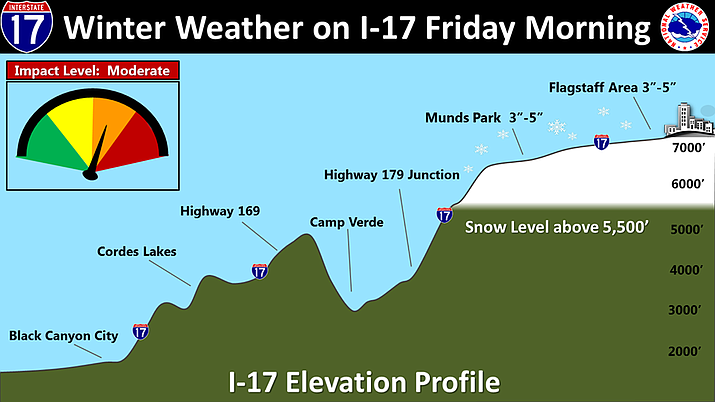 Winds and showers are forecasted in the Verde Valley Thursday night and into the weekend as departing storms from the East Coast bring low-pressure systems west, according to the National Weather Service in Flagstaff.

Friday, there will be a 50 percent chance of showers, mostly cloudy with a high near 52 in the Verde Valley, according to NWS.

Chances of rain will persist through the weekend with low temperatures hovering below freezing, according to NWS.

According to NWS, snow is also expected to accumulate in elevations above 6,000 feet, which may impact traffic condition along Interstate 17.

“We'll have rain below 5500 ft,” according to an NWS post. “Look for the worst conditions from Munds Park to Flagstaff to Williams with 3-5" (of) snow. Isolated showers and flurries in the area will last into Saturday. Stay tuned for details on the next storm due in Saturday night.”

NWS reports that 23 percent of non-recurrent delays on highways across the nation is due to snow ice and fog. Travel speed can also be reduced between 40 and 60 percent, according to NWS.