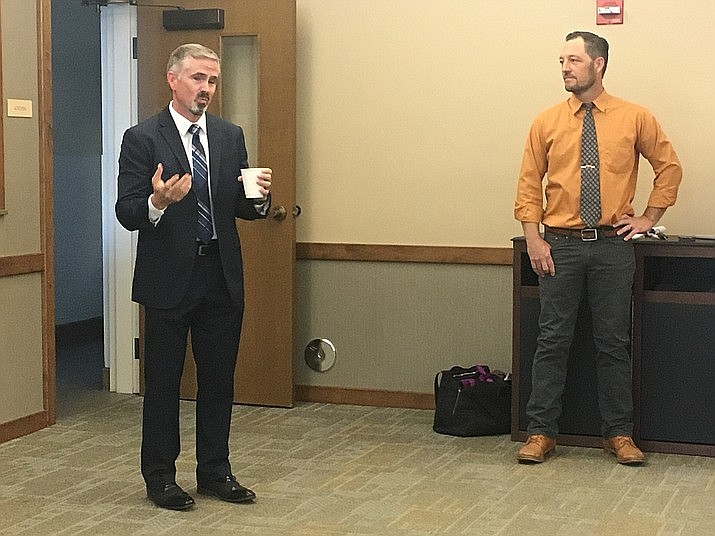 COTTONWOOD -- The City of Cottonwood announced Ron Corbin as its top candidate for city manager Friday.

Cottonwood Mayor Tim Elinski said council sifted through more than 100 candidates before selecting the finalists. The city interviewed four of the finalists Nov. 16- 17.

“We are grateful for the opportunity to work with Mr. Corbin,” Elinski said in a city news release. “Ron’s broad background and experience will be an asset to the organization as we continue to move our community forward. This is a decision the council easily reached consensus on. We are all excited to welcome Mr. Corbin to the team and eager to get to work.”

Both Elinski and Vice Mayor Kyla Allen said consensus was reached after two days of executive session. Allen said the decision was made after the final round of interviews Nov. 17.

For Council Member Deb Althouse, Corbin stood out to her after she reviewed his background and resume.

“After meeting Ron and hearing answers to some tough questions from council, I felt he was the best fit for Cottonwood because he will work to build consensus within Council and the community,” Althouse wrote in an email. “Ron thought outside the box and gave us some great ideas. I am looking forward to working with him."

The city solicited services from Novak Consulting Group to help them in their search for a new city manager. The Town of Clarkdale is using the same firm in their town manager search.

Council Member Michael Mathews said Corbin stood out for him early on.

"Out of 101 applications, Novak Consulting provided 11 candidates that met our criteria," he wrote in an email. "Ron Corbin stood out immediately as the top candidate and continued to be my first pick throughout the process. In reviewing his resume and career progression he looked like a perfect fit for our needs. His written assignment and interviews only confirmed that we were very fortunate to have somebody of his caliber and experience as our next city manager."

The city will consider Corbin's contract during the council’s Dec. 4 meeting at Cottonwood Council Chambers in Old Town. His employment with the city is set to begin Jan. 7, 2019.

According to the news release, Corbin has 16 years of government experience and has been with Yuma since 2014.

Before Yuma, Corbin worked as the human resources director for the Town of Oro Valley and deputy HR director for Yuma County.

In an interview with the Verde Independent on Nov. 16, Corbin said a big draw Cottonwood has for him is "the smell."

He said he was walking down Old Town and caught a whiff of wood burning stoves and it reminded him of his home in Arkansas.

For Corbin, city manager is a buffer between staff and council. He said a large part of that is building trust and respect, even when council and staff don't agree.

"It's about making sure staff is prepared," he said.