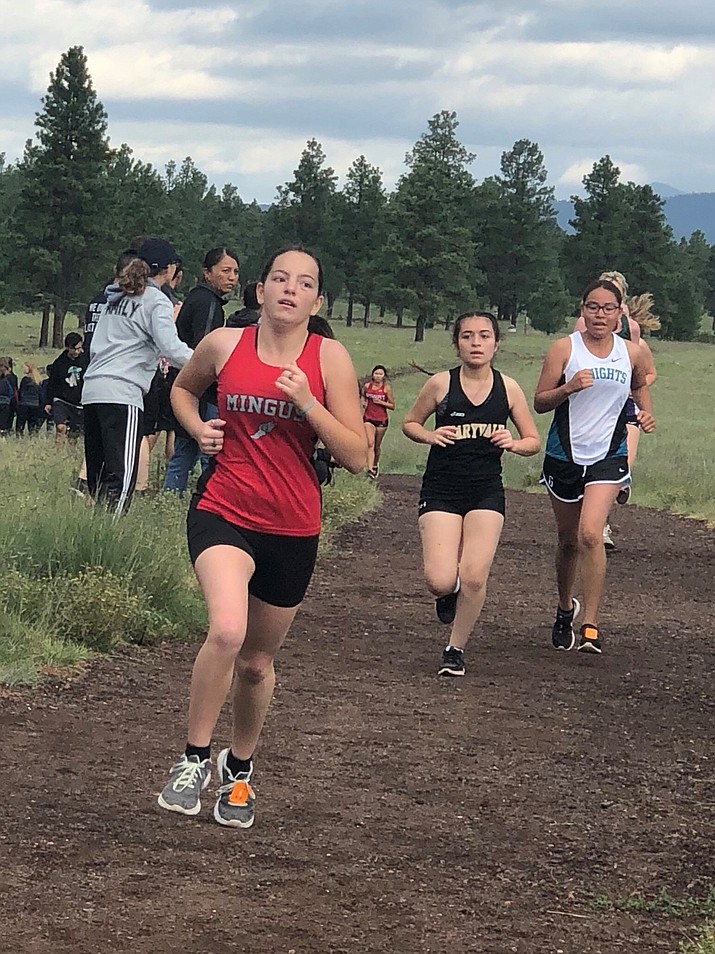 Mingus frosh Ryler Culver held down the No. 5 spot for the Mingus girls at Desert Twilight Friday, enabling the Marauders to claim the overall small-school team title. Photos courtesy of Macy Ahlers

Any talk about the future of the Mingus Union cross country program brings a quick smile to the face of Head Coach Dave Moncibaez.

After Friday’s performance in the prestigious Nike Desert Twilight Invitational in Casa Grande, it’s easy to understand why Moncibaez is smiling.

Desert Twilight is a showcase of the best teams and individual runners in the Southwest at every level from middle school to high school national elite runners.

During Friday’s small-school freshman-only races at Twilight, both the Mingus boys and girls ran away with the team titles.

With 15 being a perfect score in cross county, the Mingus girls’ freshman team was especially dominant at Twilight, winning with a low score of 23 points, outdistancing Tucson Sabino by 13 points.

Claire Peterson led the way for Mingus with an 11th-place finish over 5,000 meters in 24-minutes, 38-seconds. Peterson’s sister, Aubrey, was three places back in 25:07. Rounding out the scoring effort for the Marauders was Brooklyn Arnold, Hannah Normandin and Rylee Culver.

The Mingus boys’ frosh team ran away with the team title with a low score of 38, 19 points better than runner-up Snowflake.

Marcus Bueno led the way for the Mingus boys with a 19:30 clocking over the 5K course. Andy Babcock also cracked the 20-minute barrier for Mingus in 19:59, while Isaac Reynolds, Retief Tapija and Anthony Rivera rounded out the scoring for Mingus.

The Mingus boys varsity also had its best showing of the season at Twilight, finishing 16th among 61 teams in the small-school division.

For the third time this season, sophomore Riley Bliss led the charge for Mingus, finishing 60th among 436 runners in a personal record 17:47. Another sophomore, Jehiah Rogers, also broke the 18-minute barrier in 17:56. Senior Nick Lodico was Mingus’ No. 3 runners in 18:34 while sophomore Henry Durnez – who has amazing closing speed – dipped under 19 minutes for the first time in 18:57. Senior Izayis Hale, another speedster, closed out the scoring for Mingus with a 19:00 clocking.

Individually, the best performance of the meet for Mingus came from senior Meg Babcock. She finished 10th overall in a field of 349 runners with a personal record 20:18 clocking. Babcock in currently the 11th fastest 5K performer in the Division III northern league and has the 21st best time overall in the state among Division III runners.

Saturday, the Mingus runners head to Phoenix to compete in the Thunderbird Invitational.