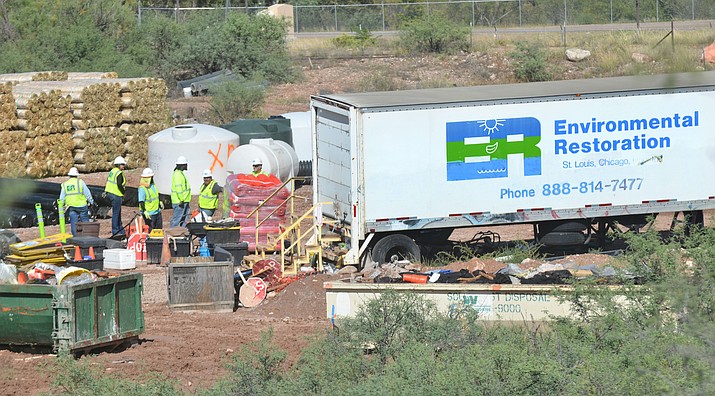 Environmental Restoration will be leaving Clarkdale’s soil remediation project, explained Town Manager Gayle Mabery. A crew is at a workyard off Tuzigoot and Broadway roads on Wednesday. VVN/Vyto Starinskas

CLARKDALE -- The contaminated soil removal from hundreds of yards in Clarkdale is coming to a stop and the clean-up crew is leaving town.

The remediation subcontractor for the town-wide United Verde Soil Program (UVSP) will be leaving the project once they finish work on several more properties, according to Town Manager Gayle Mabery, adding that this will mean a delay in soil removal for property owners.

“Environmental Restoration is finishing up the work on all properties that are currently under construction (I believe there are eight properties currently under remediation),” Mabery said in a statement. “However, starts on new properties will not begin until a new contractor is assigned.”

“Freeport Minerals Corp. is working with its general contractor, GHD, to identify a new subcontractor to perform soil excavation and yard restoration activities for the United Verde Soil Program (UVSP),” explained James Telle, spokesperson for Freeport Mineral’s Corp. on Thursday. “Freeport and GHD hope to fill this role as quickly as possible and appreciate the patience of those property owners whose soil replacement will be delayed by this transition.”

Soil contaminated with arsenic and lead from the town’s former copper smelter is being removed from yards and town property in Clarkdale in the United Verde Soil Program by the Freeport McMoRan Company.

The contaminated soil is being stored at a temporary site between Sycamore Canyon Road and Pecks Lake until permits are approved for a permanent repository site near the TAPCO access point next to the Verde River.

As of August, 463 “Soil Cleanup Access Agreements” have been signed in the remediation program, according Freeport Minerals Corp. monthly summary report to the town.

Mabery said the town was notified by Freeport in mid-September that there would be a change in subcontractors.

“To be clear, Freeport’s contractor (GHD) who is managing this project for them, remains on the job and is our primary day-to-day contact relating to the United Verde Soil Program,” Mabery said. “GHD was tasked with hiring the remediation subcontractor (Environmental Restoration), and it is Environmental Restoration who will be leaving the project.”

The town manager said that residents should anticipate three to four weeks of delays as the project transitions, but, “In the scope of a three-year project, we don’t see the three- to four-week transition as a big issue.”

The soil clean-up began in May.

Mabery said she didn’t know “what contract issues transpired between GHD and Environmental Restoration that necessitated the change, but with GHD as our primary contact.”

GHD is required to have a permit for every parcel that is remediated under this project, and the Town of Clarkdale has a contracted inspector assigned specifically to conduct inspections on the United Verde Soil Program projects on the town’s behalf, Mabery said.

“While the town has received some phone calls, emails and in-person contacts through the course of the project, no one has gone through our formal written complaint process,” she said.

The town manager said that with any large-scale project such as this, broken water and sewer lines would be expected considering they are 100-plus years old in historic homes. “Both of those issues were repaired as would be expected,” she said.

“Overall, property owners who have had their yards remediated have been pleased with the outcome.  In addition, the town also has expressed its pleasure with how the soil cleanup and restoration of Town Center Park was addressed,” Telle said.

Besides the properties that have been cleaned up, the soil atop the Main Street Park was completely removed and replaced and was reopened on June 23.

Based on the soil sampling results, the Clarkdale Town Park was categorized as a “Tier 1” property under the Arizona Department of Environment Quality’s approved Remedial Action Work Plan, and it was the first property to be remediated. The Freeport crew then moved into the residential areas of the historic town.

The UVSP has completed remediation and restoration work on 41 properties in Clarkdale, Telle said.

“Once a new subcontractor is selected and under contract, the UVSP will re-commence its soil removal and replacement activities at no cost to property owners,” said Telle in his statement for Freeport Mineral’s Corp.