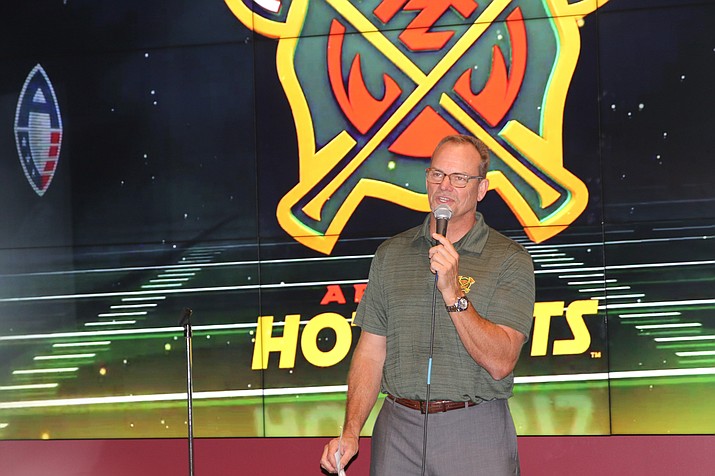 Scott Brubaker, president of the Arizona Hotshots, stands in front of his team’s logo. (Photo by Ricardo Ávila/Cronkite News)

TEMPE – The name of Arizona’s newest professional football team has received support from fans, but it also has raised concerns about whether it exploits the memory of the Granite Mountain Hotshots.

The Alliance of American Football, which will begin its inaugural season in February, said it chose the name Hotshots as a tribute to a group of specialized firefighters. For many in Arizona, though, it evokes memories of the Granite Mountain Hotshots, a 20-person crew of Prescott firefighters who battled a wildfire in 2013 on Yarnell Hill, southwest of Prescott. Nineteen died while fighting the blaze.

Yarnell Hill Fire Chief Ben Palm said the league didn’t consult his department on the name choice. He doesn’t directly oppose the name and believes that honoring heroes and hotshots isn’t a bad thing, “but trying to profit off other people by using names of heroes, it’s not a big thing I support.”

Arizona Hotshots President Scott Brubaker, a former Diamondbacks executive, said at a news conference Wednesday that the team has great respect for the Granite Mountain Hotshots.

“In no way shape or form are we building a marketing campaign around this tragedy,” he said.

On Twitter, one user said he loved the name; another complained that it compares football players to “actual heroes.”

Hotshots are an elite branch of firefighters who use specialized tools to cut through brush and trees to stop the spread of wildfires.

It is a demanding job that requires a high degree of physical fitness, according to the National Parks Service. Hotshots are hand crews that have to be fast and nimble. The crews are deployed to the front lines, where they battle wind and terrain in an effort to outmaneuver unpredictable wildfires.

It also is dangerous work.

The Yarnell Hill Fire was the deadliest wildfire in Arizona history, responsible for the most firefighter deaths in the United States since the Sept. 11 attacks, according to the National Fire Protection Association.

The use of Hotshots as a team name is a sensitive issue for some.

The 30-second video features footage of wildfires and images of the late Sen. John McCain and former ASU and Cardinals player Pat Tillman, who quit football to join the elite Army Rangers and was killed in Afghanistan.

The team’s crest is two crossed Pulaskis – a tool used for wildland firefighting similar to an ax – against a background of flames and “AZ” displayed over a firefighter shield.

An AAF website post read: “The Hotshots draw inspiration from the more than 100 elite teams of exemplary, ferocious wildland firefighters.”

Prescott Fire Department Chief Dennis Light said the AAF didn’t consult his department, either, regarding the name use.

“They didn’t reach out, nor would I have an expectation that they would,” Light said.

Light said using the Hotshot name for a sports team has two possible meanings: “One side of it could say you’re honoring the fallen, the other could take exception to it.”

Light said he hopes the Arizona Hotshots honor the Yarnell Hill 19 in a traditional sense at some point.

“Personally, as long as they use the brand in an honoring and respective way, I don’t take any offense,” he said.

Arizona Hotshots General Manager Phil Savage, who has extensive NFL experience as an executive with the Cleveland Browns, Baltimore Ravens and Philadelphia Eagles, said he found out about the team’s name on Monday, along with the general public.

Savage said the Arizona team wasn’t consulted in any way regarding the new name and that it came directly from the league’s front office in San Francisco and Tampa.

The next step for the Hotshots is preseason camp in January in San Antonio. After that, the team will return to Tempe for its regular season opener in February – one week after the Super Bowl. Dates and opponents haven’t been finalized.

One of AAF’s main draws is having local talent on the rosters. It determines the list of available players for selection through a geographic allocation process through colleges.

The Hotshots, who will play their home games at Sun Devil Stadium, have the AAF rights to players from ASU, Arizona and Northern Arizona.

Some of the former ASU players who have signed to play for the Hotshots are quarterback Mike Bercovici, linebacker D.J. Calhoun, running back Demario Richard and defensive tackle Will Sutton.

Sutton is headed back to Tempe four years later. He said he never imagined playing in Sun Devil Stadium again.

“This is a great opportunity,” Sutton said. “The potential is great. We’ve got to go out there and put on a showcase and show we can still play some football.”

The Hotshots have an informal agreement with four NFL teams that give the team preference in obtaining a player dropped by the NFL franchise. They include the Baltimore Ravens, San Francisco 49ers, Chicago Bears and the Arizona Cardinals.

AAF players have an opt-out clause to join an NFL if they’re called up. They may return to their respective AAF team if the NFL opportunity doesn’t work out.

The Hotshots have only 10 of 75 roster spots remaining to be filled, and Savage said one player the team is recruiting is Jaelen Strong.

Strong is currently recovering from an injury and has NFL hopes, but the Hotshots would like to reunite him with Bercovici, his former ASU teammate.

Brubaker said the AAF teams will supplement rather than compete with NFL football because the best 500 professional football players who aren’t playing in the NFL would make up AAF rosters.