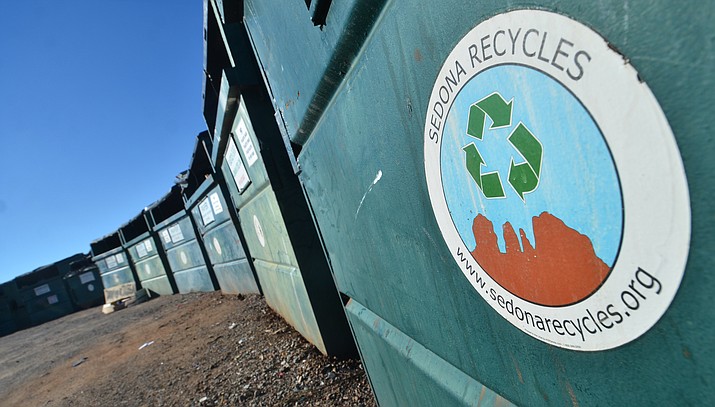 As is required by its contract with Yavapai County, Sedona Recycles still maintains five recycling sites in the Sedona-Verde Valley region. They are located at Clarks Market in VOC, Cornville Mercantile and Oak Creek School in Cornville, the Verde Village Clubhouse and the largest site, located just across from Mingus Union High School on Camino Real. VVN/Vyto Starinskas

When asked the reasons for the removal of recycling bins in Lake Montezuma-Rimrock this week, McCutcheon was direct and to the point.

“Our truck is old, prices are abysmal and there is no way to increase funding,” said McCutcheon.

For Beaver Creek residents, that leaves them with the choice of disposing recycling material with their trash, paying to have a commercial trash/recycling hauler do curbside pickup or drive to Cornville or the Village of Oak Creek to unload their recyclables.

As is required by its contract with Yavapai County, Sedona Recycles still maintains five recycling sites in the Sedona-Verde Valley region. They are located at Clarks Market in VOC, Cornville Mercantile and Oak Creek School in Cornville, the Verde Village Clubhouse and the largest site, located just across from Mingus Union High School on Camino Real, said McCutcheon.

The challenges confronting the recycling industry in the Verde Valley are not unique to Sedona Recycles.

“The recycling industry as a whole is experiencing very real problems,” said McCutcheon. “The method of collecting material single stream (all recyclables combined) created bales with high levels of contamination, which were then exported to China. China would recover what they could and then burn the rest. Their air became so polluted that they decided to make major changes and stopped accepting this contaminated material in an effort to clean up the pollution. As a result, the domestic U.S. markets that we ship to became overwhelmed with material. All the big companies that exported now needed new U.S. markets. Because of the overabundance of material in the markets, the mills drastically lowered what they were willing to pay for recyclable material.”

For example, McCutcheon said , “At the end of 2017 cardboard was selling in our area for $185 a ton. For the last six months it has been selling at $60 a ton. This is the lowest price I have seen in the 15 years I have worked at Sedona Recycles. We do the exact same amount of work to collect and process the material and receive a third of what we had received. Every load that comes into our facility loses money.”

McCutcheon said numerous recycling facilities in the United States have ceased operating in the past year. Many companies collecting recyclables are taking materials straight to the landfill because they can’t afford to process the material in a manner that is clean enough to sell domestically.

“We have never done that,” said McCutcheon. “Single stream and mixed waste collection have ruined the export business for recycling and many facilities and haulers are now considering going back to the old dual-stream collection model to produce cleaner material. Sedona Recycles collects in five streams and we have never done it any other way. The point is to see the most material recycled and that can only really be done by separating materials at the source. Unlike trash haulers, we only recycle; it is not a side line.”

Sedona Recycles has not had a drop-off site in the Cottonwood city limits since 2015, after the city discontinued funding for the non-profit, said City Manager Doug Bartosh.

Sedona Recycles does not have a contract with the Town of Jerome, said McCutcheon, but, “We have given them the use of a recycling trailer, which they haul to the center in Sedona once a week to be emptied. We go to Jerome once a month to empty eight bins of cardboard that they have collected themselves from local businesses in their town.”

McCutcheon said Sedona Recycles’ contract with Yavapai County to provide bins in the Verde Valley “has an automatic extension but can be cancelled by either party with 90 days’ notice.”

District 3 Yavapai County Supervisor Randy Garrison said “the remaining sites are currently open and accepting recyclables. From our discussions, Sedona Recycles is constantly monitoring their sites and trying to remain solvent by modifying their routes, while also trying to be as accessible as possible to the public.”