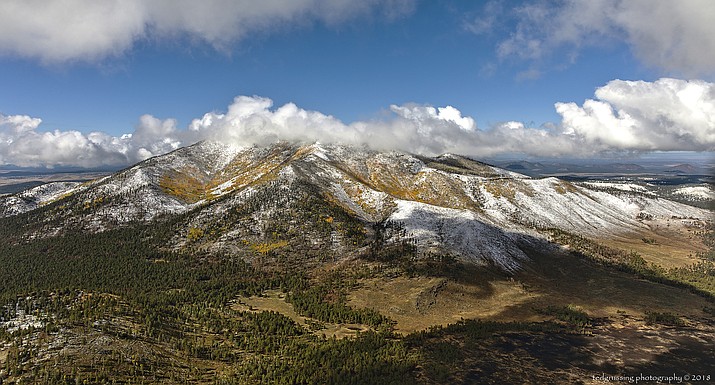 I'm blown away by the beauty that surrounded me this morning … my first flight in Mariah for a long time was nothing short of remarkable and reminded me of the shoot that the Loon gave me in Northern Wisconsin just a couple of weeks ago.

I took off, and began climbing through spaces in the clouds whilst heading north to the Peaks. I went through 12,500’ near the top of Oak Creek Canyon and as far as I could see the earth was blanketed in clouds to the north. Cloud tops ranged from about 11,500’ to 12,800’ and nowhere was the top of the San Francisco Peaks to be seen. I began wondering if I was going to get any shots at all, so headed to the east side of the peaks where it looked like there were some open spaces to go down through, and maybe get some shots from below the clouds, as for sure I would get nothing from the top. The first shot, “Sandwiched” is shot from the SE side of the peaks and looking up across and through the ridgeline on the S end of the inner basin … spectacular color, snow and clouds. This is my first flight up there of the fall season so not sure what end of the color season we are looking at and hoping it is nearer the beginning that the end.

Titled it, “Sandwiched” because that is how I felt, sandwiched between the clouds and the ground … you get a sense of what I saw from this photo and the peak, buried in clouds on the left side of the photo is Humphreys Peak. As I flew around the NE portion of the peaks which you can see towards the right side of the image, the sandwich got even more compressed in some areas, but the color and views were amazing. From here I flew in close to the Inner Basin and shot inwards from a little inside of Lockett Meadow, then around the north side before heading over to Kendrick Peak which tops out around 10,500’ and it was looking good … clouds, snow, fall color and large patches of sunlight. Of all my trips up there to shoot the mountains, this was the most beautiful flight I have ever had up there. I was concerned about how much color there would be on Kendrick after the burns last year, but they are beautiful as you can see.

Not sure if I will go back up there tomorrow … if not then probably Thursday … depends … USFS is going to be igniting slash piles in the Lake Mary area tomorrow. Forecast winds should keep the smoke away from the peaks. We’ll see.

Have a beautiful day and if you get a chance to head up there tomorrow or the next few days do it … not often you get snow and color like this … in all the years I have been flying up there for color, this is the first time I have had snow with the color. Keep breathing and smiling … the two kinda go together. What a neat little planet we live on … “spaceship earth”, our vessel to travel the stars.