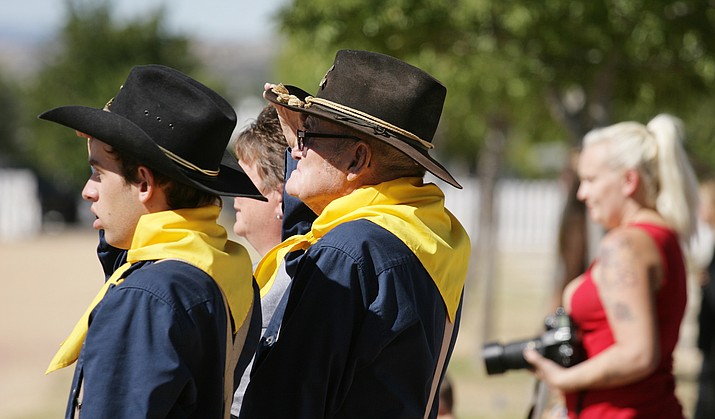 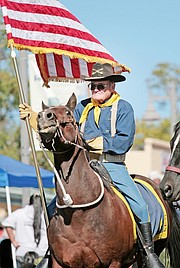 In his lighter-than-wool uniform, Parrish and the other Cavalry members will participate in the annual Fort Verde Days parade as they always do, on horseback. VVN/Bill Helm

But it’s Fort Verde Days, the crowning jewel of Camp Verde’s annual signature events, which is nearest and dearest to the Cavalry’s members.

Howard Parrish, 90 since late-April, is the sole surviving founder of the Cavalry. Not many nonagenarians ride horses in their town’s annual parade. But Parrish isn’t your average man.

Parrish harkens back to 1957 – or maybe it was 1958 he says – when the Camp Verde Cavalry was founded of ranchers, construction workers and farmers.

“We ordered the uniforms from New York,” Parrish recalled. “They’re wool. And we hated wearing wool in the hot sun. We use wash and wear, now.”

In his lighter-than-wool uniform, Parrish and the other Cavalry members will participate in the annual Fort Verde Days parade as they always do, on horseback.

Parrish has only missed two Fort Verde Days parades. The first one, and in 1993, due to a prior commitment. As long has he can ride his horse, Parrish said, he’ll be in the parade.

King, who was wounded in November of 1874 at Sunset Pass, never fully recovered from damage to his right arm.

That story is what inspired Parrish to start the Colonel’s Daughter competition.

“It’s more than a beauty contest,” he said. “It’s very important for Camp Verde to have this every year. It’s something that nobody else has.”

At 10 a.m. Saturday, Parrish and the rest of the current members of the Camp Verde Cavalry will take part in the annual Fort Verde Days parade, as they escort the Colonel’s Daughter and her Court down Main Street.